I have the hardest time setting a book down. Even when I am bored out of my skull. Even when it’s terribly written and page after terrible page it doesn’t appear to be getting any less terrible. Apparently, I’m haunted by this guilt complex—a weird combo of lapsed Catholic and former English major—that just compels me to keep reading stuff I don’t like. I’ve written about this before but it reached some kind of crescendo the past few months when I realized that instead of my usual 7 to 10 books per month, I was down to like, four. Four books that were the very opposite of page-turners. And I had such high hopes for them. I’ve written about this too. When I pick up a book, I really really want to like it. I love books and I root for every single one to be wonderfully written and transformatively transporting. I am not like the editor who is looking for reasons to cast a book aside. I am the long-time book lover giving the author a second and third and tenth chance. Sometimes this hopeful strategy works. But alas, many times, it does not. Sadly, there are soooo many ways a book can go wrong.

But last week I did the unthinkable and stopped reading a book about a third of the way through. And although I still feel twinges of English majory guilt, this courageous decision led me to read books that I probably wouldn’t have gotten to so quickly if I was still plugging away through the bad one.
A reminder here about my criteria for a good book: it’s got to have a compelling story-- that’s it! --something that makes me want to keep turning pages. (PS: It helps if the main character is someone I care about, and I can’t guess where the thing is going on page five.)
So, that said: here are the three fun reads—perfect for the young adult in your life (or for you!) in the order I read them: 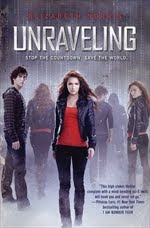 1. Unraveling by Elizabeth Norris. Okay, this book is a Page Turner with a capital P. So be warned. Also, because a lot of what makes the book suspenseful is the reader NOT knowing stuff until it unfolds, I will not spoil it be revealing everything and therefore ruining it for you. It begins with a girl, Janelle, being hit by a truck and dying and then being brought back to life by mysterious loner kid from her high school named Ben. Janelle’s father is an FBI agent working on a weird case that involves some kind of countdown (to a bomb?). And somehow the events—the truck accident, the miraculous healing by Ben, and the FBI case are all related. There’s a cool X-Files twist. Also, an interesting subplot of internal family drama with Janelle having to parent her younger brother because their mentally ill mother and workaholic father aren’t up to it. The writing is clever. There’s humor and romance. And the tag-line on the cover is cool: Stop the Countdown. Save the World. Two potentially annoying side notes: (1) looks like there will be a sequel (2) book doesn’t come out until May. So don’t forget to look for it then!

2. Bewitching by Alex Flinn. Not sure how I missed this, since I read so many freaking YA books, but this book is a sequel (or companion book) to another, Beastly, which I guess was made into a (lame—says my daughter) movie. Bewitching is about a witch named Kendra who finds that using her magic to help people often ends up making things worse for them. What’s cool about the book is that Flinn uses Kendra to tell multiple stories, and in the process turns several fairy tales inside out, so we get fresh takes on Hansel and Gretel, Cinderella, the Little Mermaid, and The Princess and the Pea. (Beastly, I’m assuming is about Beauty and the Beast.) I’ve seen versions of fractured fairy tales before (it’s IN right now in YA fiction) but Flinn does it best. I promise you, you will be rooting for the stepsister and praying for the Cinderella character’s downfall in this one. Funny. Clever. And a spot-on characterization of high school mean girls. Good news: book is available now. (And I will definitely be checking out other books by Flinn.) 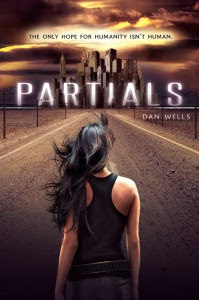 3. Partials by Dan Wells. (Digression: why is it that most YA books out at the moment have one word titles? Possible answer—one word—Twilight.) Partials is another example of the dystopian/post-apocalyptic novels that are saturating the YA market lately. (Another digression: I am at the saturation point with these books, too. How many ways can we end the world? How many bleak/survival-of-the-fittest type landscapes can we trek through? How many times can I fear for my own survival and start seriously considering hoarding canned goods, buying a gun, and installing solar panels on my house?) The fact that I am putting this book in the must-read column for you is an indication that it rises above the pack. So don’t disregard it.

The novel picks up about a decade after humanity has nearly been destroyed by these half-robot creations called Partials. They were made to fight our wars for us, but at some point they turned and fought us. Also, they released a destructive virus that took out nearly everyone else. Now there are only a few thousand humans left and cobbling together lives on the Hamptons, of all places, fending off potential attacks by Partials, worried about dissenters and stragglers who don’t like the totalitarian bent of the colony, and most distressing, trying to figure out a cure for the virus that kills each human baby born minutes after birth. The main character is a teen girl, Kira, but the whole time I was reading, I was thinking the book would appeal to boys (maybe because it’s written by a guy?). LOTS of references to military stuff and guns and biological research (Kira’s a medic). Very heavily Sci-Fi (which I don’t normally like) but the story is absorbing and there are enough twists and turns in the plot (plus some hints of romance and jokey banter between the kids) to keep things moving along. In stores now--just in time for your Spring Break trip (to the Hamptons?)
Posted by Jody Casella at 10:32 AM