Some books are easier than others to pitch in a sentence or two. Take the new YA novel Every Day by David Levithan: Every morning the main character wakes up in someone else's body and must live the day out as that person. Kind of a Quantum Leap meets Ground Hog's Day. Editors (and the publishing company marketing team) love high concept books like this. It's way easier to sell a book that you can explain in a few seconds. Writers conferences I've been to even hold sessions about crafting what they call elevator pitches. (Just in case you ever find yourself on an elevator with the agent of your dreams--how can you best sum up your manuscript in the time it takes before you get to the next floor?)

One of my favorite books of all time, How I Live Now, is hard to pin down in a paragraph, never mind a sentence. I can't even tell you what genre it is. Post Apocalyptic? Fantasy? Romance? Adventure? After I read it, I pretty much just sat there stunned, rereading the last page because I didn't ever want the world of the book to end. It wasn't until later that I wondered how the heck Meg Rosoff managed to snag the attention of an editor. This was her first novel (for which she deservedly won the Printz Award), so she probably had to do a bit of pitching and querying and synopsis-ing.

Maybe you'd call a book like this low-concept. Whenever I come across a good one of these, the only thing I can think to do is stick the book in your hands and say, Trust me, read it!

But because I am attempting to act like a book reviewer, (also I don't know you and have no way to actually stick a book in your hands), I will do my best to describe this awesome book I read the other day, All You Never Wanted by Adele Griffin. (Pathetic digression: I am ashamed to admit that I've never read a book by this author before, never, uh, heard of her until a few weeks ago. Ridiculous, because I pride myself on how much YA fiction I read, and tragic, because Adele Griffin is a really really good writer; I scrolled around her website and it looks like All You Never Wanted is her 18th book! and I've now got to get busy checking all the others out.)

The blurb on the back of the book plays up the sibling rivalry between sisters Alex and Thea. They're living a fairy tale life in upscale Greenwich, Connecticut, (their single mom recently married a bazillionaire tycoon) but there's turmoil under the surface. Older sister Alex is beautiful and popular and seems to have it all. Thea is brilliant and envious, coveting Alex's enviable life, which also includes Alex's boyfriend, and she'll do anything to get it. Cue soap-opera-y music.

But this book is not a soap opera. The narrative moves back and forth between the two sisters' points of view. Yes, Alex is beautiful, but she's struggling big time with crippling anxiety. Her boyfriend's a great guy, sticking by her even though she's falling apart, but on the other hand, he's sort of a loser too. Why does Thea like him so much anyway? And why is a smart girl like Thea using her brainpower in such destructive ways? None of these characters are what they seem.

And here's something funny that just occurred to me: there is a fast-moving, page-turnery plot at the core of this book, but when you scrape away the details, what you're mainly left with is two girls planning a party. But this is like saying that all of Jane Austin's books are about planning weddings.

Oh, there is so much more going on than a party (even though it is a party of epic proportions). I was biting my nails and worrying over these people, because they do seem like real people, watching as the inevitable (yet somehow unexpected) end approached. There is real love (and lust) involved. There's also real drama and heartbreak. And evil. Geez, what people will do to hurt each other, especially the ones closest to them. When I closed the book, I was breathing fast, and my head is still churning with how it all ended up. Not sure how in the world Adele Griffin pitched this manuscript to her editor. Teen drama? Romance? Psychological horror?

Whatever. I give up.

Please. Trust me. Read it. And then give me a call so I can talk about it with someone! 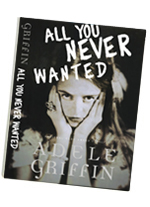 Email ThisBlogThis!Share to TwitterShare to FacebookShare to Pinterest
Labels: Adele Griffin, All You Never Wanted, David Levithan, Every Day, Fault in our Stars, How I Live Now, John Green, Meg Rosoff