Lately, I've had a rocky relationship with reading. For several months nearly every book I picked up was a big miss for me. I felt like I was on a string of bad blind dates (not that I've ever been a blind date. But I can imagine the feeling.) You hear about the person from a friend. Or maybe you meet him online. You have high hopes that you'll hit it off. You really really want to like him. And then you meet, and for whatever reason, you just don't click.

I am not a picky reader! I've read and enjoyed all kinds of books. Classics. Literary fiction. Lots of young adult stuff because I write YA books and I like to know what my fellow YA writers are writing. I also read non-fiction. Memoirs. Mysteries. Romances. Whatever. As long as there's a decent story at the core, I'll give it a chance. Confession: I read the Fifty Shades of Grey Trilogy. I'm not particularly proud of this fact, but I'm telling you to prove that I have never been hard to please.

And yet, I was starting to reconsider everything I believed about myself as a reader. Books had become a struggle. I felt like I'd read them before. I knew where they were going. The characters didn't seem like real people. I didn't care what happened to them. The writing wasn't great or it was downright bad. I found myself revising passages in my head. Why did the author use the word "murmur" 13 times in the last five pages? Did she really need to include a particular scene? And why was there another teen boy love interest described as having "piercing green eyes"? Do I know ANY guys with piercing green eyes?

Book after book after book had me feeling the same thing: a flash of hope and then the inevitable letdown when it didn't live up to the potentially promising premise.

OMG, I thought. Was I losing my ability to enjoy a book? Had I read too many books over the course of my lifetime and therefore read every possible scenario? Or was this condition a result of my work as a writer? I know how books are put together now. I've seen the man behind the curtain. Questioning every authorial decision and editing paragraphs as you read, let me tell you, tends to pull a reader out of the story.

Or what if my problem was a change in my brain chemistry? My computer science-y son had shared a study with me about the impact of internet surfing on the human brain. Apparently, we're losing our ability to focus, to read larger chunks of material. It's all that jumping around we do from website to website. All that tweeting. I confided my fears to my husband and he laughed. "Your brain chemistry has changed in the last two months?" he said. Okay. Maybe that was a stretch.

All I knew was that I didn't like books anymore, that I couldn't seem to read without pausing after every other sentence. Maybe I needed to stop reading. Or at least take a break from it. Give my twitchy tweeting brain a rest.

And then I happened to pick up a book. This was one from my stack, a book I'd been meaning to read for months, the popular and critically acclaimed dystopian novel Divergent by Veronica Roth. I read it in one sitting on plane trip. Huh. It was good. From the very first page I was hooked. On the plane trip home I read another book, Ask the Passengers by A. S. King, which also turned out to be absorbing and thought provoking. At home I picked up other books. They were good too. More than good. I practically cried in relief. I hadn't lost my ability to read books. I had lost my ability to read bad ones.

Which sounds snotty, I know. So I'll say it a different way: It's not them. It's me. Apparently, I AM a picky reader. What I've realized the past few months is that some books do it for me, and some don't.

Here's a rundown of the ones that clicked:

Divergent, Veronica Roth. It's no accident that this book and the sequel Insurgent are on YA best seller lists. I've grown weary of dystopian lit, but this book reeled me back into the genre. Main character Tris has grown up in an orderly world where people are divided into groups based on the personality traits they value. There's an honest group, risk-takers, scholars, and Tris's group--which promotes selfless behavior. At sixteen you take a test and choose which faction you'd like to join. But what happens if you don't quite fit into any of these? Weeks later, I'm still thinking about the societal questions this novel raises.

Ask the Passengers, A. S. King. Still wrapping my mind around this one. Brilliant. Should've won an award this year. I don't know why it didn't.

The Earth, My Butt, and Other Big Round Things, Carolyn Mackler. Not sure how I missed this one along the way. It won a Printz Honor in 2003. It features a self conscious and self deprecating teen girl's attempt to assert herself and figure out her place in a dysfunctional family. Funny and sad and ultimately inspiring.

Wintergirls, Laurie Halse Anderson. I love all of Anderson's realistic contemporary YA novels, so it shouldn't have been a surprise to me that I'd love this one too. I think I'd put it off because I knew it was about anorexia and it might be painful to read. It sort of was. But so beautifully written and heartbreaking and somehow hopeful too.

Try Not to Breathe, Jennifer R. Hubbard. Absorbing story about a teen boy dealing with the ramifications of a suicide attempt and his relationship with a cool quirky girl who's looking for her own answers.

Gone Girl, Gillian Flynn. I read this one for my book club and it was a total page turner. Told from two points of view. A man's wife goes missing and he's the main suspect. You get the feeling he's keeping secrets as he tells his side, but his wife has secrets too. The reader gets HER point of view from the pages of her diary. Brilliantly plotted with shocking twists and unlikeable characters that you somehow root for anyway.

Honey, Baby, Sweetheart by Deb Caletti. A spot-on description of toxic love. Ruby's mom struggles to let go of charming but irresponsible dad. Ruby struggles to let go of Travis, a charming rich boy who draws her into his reckless and dangerous world. All the characters are complex and realistic, including the dog, Poe, who has got to be one of the most adorably destructive dogs in YA fiction.

The Arrival by Shaun Tan. If you're having trouble, too, connecting with books, this might be the perfect antidote. It is a book with no words. It's shelved as a children's picture book or graphic novel, but it transcends any genre. It's the story of a man who leaves his family behind to start life in a new country, a country that sort of looks like America at the turn of the century. Except it's not. A few pages in, you will forget there are no words and fall under its spell.

Which--and I don't care how picky this makes me--is the only thing I ask for in a book. 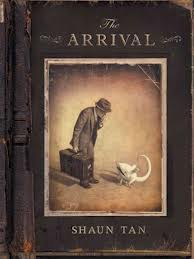