Talking Good Girls and Bad Boys in YA Fiction


The first Spring-y-like day in Columbus, Ohio, and instead of basking in the much longed for sun, shameless author groupie that I am, I headed over to one of my favorite places in the world, the children's bookstore Cover to Cover to meet a group of YA authors: Colleen Clayton, Kristina McBride, Tiffany Schmidt, and Katie McGarry. I wasn't the only fan there, but in case you missed it, here's a rundown of the fascinating, funny, and sometimes sorta heartbreaking discussion on books and boys and pretty much everything else in contemporary realistic YA fiction. 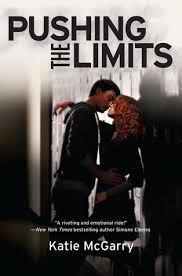 The big question was why these writers wrote about "bad" boys in their books. Katie McGarry weighed in first to talk about how she'd grown up around guys that some people viewed as being from the wrong side of the tracks. These boys were her friends, and it bugged her that they were judged unfairly. Her novel Pushing the Limits portrays a boy in foster care and his relationship with a "good" girl who's struggling with her own issues. There's a negative perception people sometimes have of poor kids, McGarry said, and she hopes her readers will see beyond the stereotype.

Colleen Clayton, author of What Happens Next, agreed. It's her sense that working class kids aren't represented in YA lit or else are treated one-dimensionally. "Why don't we see more of these boys who aren't college bound?" she asked. "We need to dig deeper, perceive the real person at the core."

The authors didn't want to give too much away about their books--whether the bad boy at the center of the plot was truly a bad boy or not, but Tiffany Schmidt and Kristina McBride wondered why girls are drawn to the stereotypical bad boy in the first place.

Tiffany said it may come down to the belief that only you can see the good guy underneath, the guy that no one else can see, and that's a heady feeling for a teen girl. 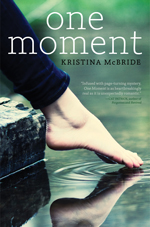 Kristina added, "Let's face it. Sometimes girls think they can fix a bad boy." She mentioned that as a teen this was the case for her. Her novel One Moment is the story of a girl's growing realization that her dead boyfriend might not have been the person she thought he was. The book is edgy, she explained, but she believes that it's a good thing for girl readers to live vicariously through characters, to see the bad choices made (and the consequences) and possibly make different decisions in their own lives.

The writers were asked what inspired them, which led to another interesting discussion. Katie McGarry told a story about going back to visit her old high school and wanting to give the kids there hope. "Kids need hope," she said, "that they can make it past today. Not that things will be perfect, but that they can survive their circumstances."

Colleen Clayton talked about having negative experiences in school and reliving that anxiety when her own kids started school. Writing about those experiences freed her and helped her find her writing voice. 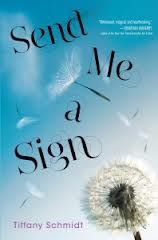 Tiffany Schmidt's novel Send Me a Sign is about a smart, hardworking girl starting her senior year. She's looking forward to what she assumes will be a bright future, but then she finds out she has cancer. Tiffany, a former sixth grade teacher, had a student in her class that faced this situation. The student didn't want to be labeled the girl with cancer. She was so much more than her illness, Tiffany said. A big issue for teens is struggling with identity. "Who are we really?" she asked. Which turned the discussion back to the need to transcend stereotypes and labels.

And this turned into a conversation about transcending genres in YA literature. Readers of YA know what's trendy--what's out (sparkly vampires) and what's probably on its way out (the end of the world). But where does contemporary realistic fiction fit into the market?

The panel felt that the demand for this genre is growing. Each of the writers is having success with their novels and they don't feel pressure to write other kinds of books. They agreed that it's pointless to write what you think is trendy anyway, given the lengthy submitting and publishing process. Better to write what feels right for you and hope the market catches up. Sometimes this has been frustrating. 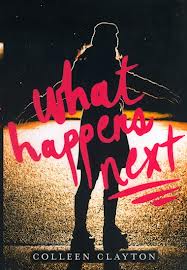 Colleen's novel What Happens Next begins with a girl being raped, but the story cannot be distilled down to a "rape book." The main character is wise-cracking and funny. She's coping with the aftereffects of the trauma but she's also dealing with typical high school friendship dramas and family conflicts and a romance. Colleen has had some people question the need for another novel on the subject of rape. They point to the classic Speak by Laurie Halse Anderson as being the definitive book and imply that this might be enough.

Tiffany Schmidt echoed the frustration that this kind of question only seems to come up when discussing contemporary fiction. "Why is it okay to have multiple books on vampires or werewolves or zombies?" This was asked with a sigh and the acknowledgment that her novel was released the same year as John Green's The Fault in our Stars. "Shouldn't there always be room for another good book, regardless of the subject?" she asked. In other words, is John Green the only author who can write about teens with cancer?

The group also talked shop, specifically, how to get published (the consensus being that you will have to write and revise and research the business. Also, prepare for the inevitable rejections), and gushed about how much they loved to read, and shared some funny stories about how they're treated by family members and close friends now that they are published authors.

"When are you going to write a real book?" someone once asked Katie McGarry, and she responded, "Aren't teens real people?"

Nice comeback, Kristina McBride said. And then it was time for picture taking and book signings and a raffling off of several cool, soon-to-be-published books. Should I mention here that one of these was mine? Um. Nah. I'll leave that for another day...

Want to find out more about these authors and their books? Check out the links below:
Colleen Clayton
Kristina McBride
Tiffany Schmidt
Katie McGarry 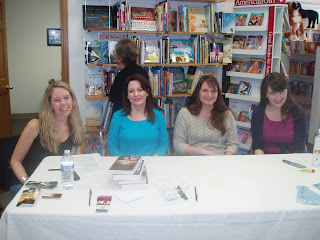 From left to right: Kristina McBride, Colleen Clayton, Katie McGarry, and Tiffany Schmidt. And there's Sally Oddi, owner of Cover to Cover in the background.