So last week was our daughter's spring break and while many of her friends were cavorting around the sunny beaches of Florida, she was cavorting around museums or traipsing through cemeteries helping us search for dead author tombstones. Yes, this is what passes as a fun family vacation when your mom is a former high school English teacher. Luckily, her father shares my passion for all things American literature/history. He's also a big go-go touristy guy who thinks that lazing about on a beach is a waste of a week when you could spend it instead hitting three cities (Philadelphia, New York, and Boston) and poking around every suggested site in the accompanying guidebooks.

For the most part our daughter was a good sport, trailing after us, her gooby parents, with only a few minor complaints. Snippets from some of our conversations:

Dad: Did you see that? It's the white dress Emily Dickinson wore!
Her: Yeah. Cool.

Me: You wanna walk around this pond and find the site of Thoreau's cabin?
Her: Um, not really.
Dad: Come on! It's only a half mile walk! Let's race!
Her: No. Really. I'm fine.

We wore the poor kid out, walking the heck out of the old section of Philadelphia, tromping through most of lower Manhattan, and following the Freedom Trail in Boston. We also explored Amherst, Mass, (home of my beloved Emily Dickinson), Concord (Thoreau! Emerson! Hawthorne! Alcott!), and Salem (a shout out here to our amazing tour guide, Susan, of the Hocus Pocus Night-time Witch Tour. While I'm at it, I should give another shout out to Seamus, our guide on a horse and carriage ride through Central Park. And his horse Marcello. And to Lucy, the ultra cool docent at the Emily Dickinson House.)

Here are some of the fascinating facts those unfortunate beach-going friends missed:

The Declaration of Independence was NOT actually signed by all those signers on July 4, 1776.

Ben Franklin's privy was located only a FEW FEET away from his water supply.

Emily Dickinson dashed off many of her poems in letters to friends and often scratched off words and wrote in alternate word choices. Meaning, these poems weren't as "dashed off" as some people believe...

She had a brother named Austin, who lived next door and sort of looks like a brooding rock star in pictures. 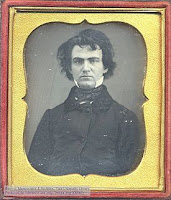 There is a photograph of her that has recently been discovered and is in the process of being verified.


Nathaniel Hawthorne was so ashamed of his family's connection to the Salem Witch Trials (an ancestor, John Hathorne, one of the judges) that he added a "w" to his name.

Thoreau's grave is just a small marker that says simply "Henry." Many visitors to the cemetery where he is buried have placed stones, coins, pencils, and pine cones around the grave marker. 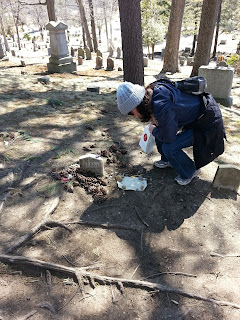 You can visit the site of his cabin and leave a stone (or rock) there too. And after, you can stop by the Thoreau Gift Shop and buy a T-shirt or a coffee mug that says: Simplify, Simplify on it. (For those in the know, the actual quote is Simplify, Simplify, Simplify, but apparently that didn't look as simplified to the T-shirt creators.) 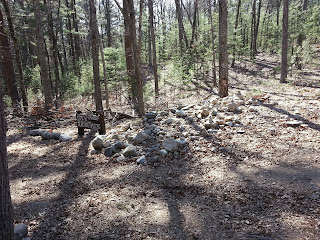 The woman who wrote The Five Little Peppers (Margaret Sidney) and the author of Little Women (Louisa May Alcott) are buried right around the bend from Thoreau. Emerson is across the path. Meville is NOT buried in this cemetery, but some guy named Melvin is--which we discovered after circling around for an hour and getting briefly lost).

If you hike the Freedom Trail in Boston, you'll see the Old North Church, Paul Revere's house, the site of the first public school in America, and a cemetery where the British used tombstones for target practice. 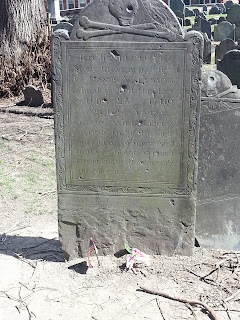 Also, there are several Starbucks.

And an Urban Outfitters.