Nova Ren Suma’s new novel, 17 & Gone, came out last week on March 21, and to mark the release of this story about a 17-year-old girl haunted by the missing, she’s asked some authors she knows to join her in answering this question: What haunted you at seventeen? (click here to see the series.) Full disclosure--Nova Ren Suma does not know me and therefore did not ask me to write a post, but I was so inspired by this writing series that I could not resist posting my own.

When I was seventeen I punched a girl in the face.

Even now, many many years later, I can see her expression, her wide eyes, her mouth falling open, and her hands flying up in surprise. "You hit me," she said. "I can't believe you did that."

I couldn't believe it either. We were stuck in a traffic jam, a pushing surge of bodies that had just been let out of a school assembly. Our little encounter had probably been witnessed by twenty people. Some of them called out "Whoa!" They laughed with glee or maybe it was discomfort. It's not every day that you see a girl lash out in what can only be called rage.

I managed to elbow through the crowd, my hand still stinging, my heart pounding, tears streaming down my face. I could hear the girl screeching behind me. "She hit me. Can you believe she hit me?"

But still, I had never punched anyone in the face before.

This was me at seventeen, a bizarre blend of opposites:


Why did I hit the girl?

The easiest explanation is to say it had to do with a boy, but it was more than that. A she said/she said kind of thing that spiraled out of control. A former best friend who was a Queen Bee. A group of desperate insecure girls competing for her attention. It happened at the beginning of my senior year. My group of friends took sides. And I ended up on one side, alone. It turned into a cliched bullying thing. Thank God there was no social media back then. I can't imagine how unbearable it would've been to have the gossip and mockery and threats coming at me on Facebook, et al. It was hard enough to bear it in real time when I was walking down the school hallway.

But I slogged through it. What else can you do? I counted down the days to the end of the year when I could run away from all of them. It helped that they were in none of my classes. I could orchestrate my schedule to rarely bump into those girls.

Until the day we had an assembly.

They sat behind me in a row. They kicked my chair. They whispered and laughed and joked. When we spilled out of the auditorium they bunched up right behind me. One of the girls poked me in the back. I was crying and she was mimicking me. I wasn't thinking anything at all when I spun around with my fist clenched.

I could've gotten suspended for fighting. Nobody turned me in. (Again: thank you social media for not existing!) The bullying didn't stop, but there were only a few weeks left of school. I was halfway out the door and stepping into the next stage of my life.

It doesn't torment me anymore. Really. It happened so long ago. I don't blame the girls. They struggled with their own demons. They grappled with their own inconsistencies in their personalities. They were doing what many of us girls were doing at age seventeen, just trying to slog through it and praying the tide wouldn't turn on them.

It is still hard to make sense of it though. How cruel we can be to each other. How stupid.

But I'm glad it happened. I'm a writer who writes stories for teenagers and this kind of thing is fuel for me, even though I've never written this particular story before. It brings me back to a place of frustration and anger and humiliation. But it also reminds me what I'm made of. What my limits are. That I can defend myself if I have to. And when I can't, I can run away--not from something, but to something infinitely better and of my own making. 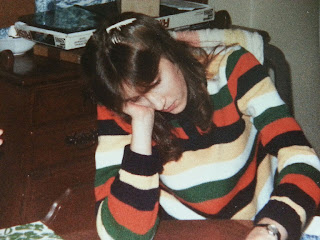 Email ThisBlogThis!Share to TwitterShare to FacebookShare to Pinterest
Labels: being a teen, Nova Ren Suma