When I was fifteen, a gazillion years ago, I wrote my first book. I gave it what I thought was a poignantly symbolic title: Another Leaf Just Fell, which was just perfect for the subject matter, a tearjerky--heavy on the symbolism--YA romance about a girl who falls in love with a handsome popular boy who, unbeknownst to her, is dying of cancer. (Cue soap-opera-y music.) I hand wrote the first draft of this manuscript and then revised it several times before painstakingly tapping out the whole thing on my typewriter. 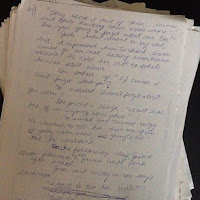 Finished at last, I was ready to pursue publication, but I had no clue how exactly to pursue said publication. In a great moment of serendipity I stumbled upon an ad in the back of my Seventeen magazine for a publishing company called Carlton Press. Carlton, according to the ad, promised great success for its authors. I wrote my first query letter and crossed my fingers.

Several weeks later I got a response from B. Leiter, Associate Editor. For only three thousand dollars Carlton would happily publish my book. Mr?/Ms? B. Leiter added kindly (and I'd say somewhat snarkily) that if the cost was too much, perhaps I "should try some of the giant firms who do not require any subsidy from their authors." I had never heard the term vanity press at this point, but even my naive little fifteen year old self had an inkling that the Carlton route was probably not the route I wanted to trek down. 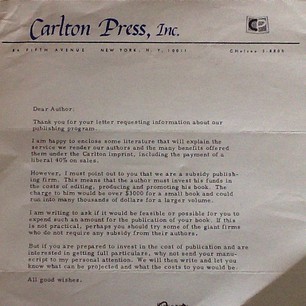 Besides, I did not have anything approaching 3000 dollars.

I put the manuscript away.

It would be nearly fifteen years before I wrote another novel, and fifteen years after that before I snagged my first publishing deal from one of those giant firms that don't require a subsidy from their authors. It was a loooong road to publication and there were a ton of things I had to learn along the way to navigate that road.

It probably didn't help that the publishing business kept changing even while I was trying to figure it out. I remember going to a writing conference in the mid 1990's where the keynote speaker, an editor from Simon & Schuster, told the eager children's writers that we did not need to have an agent and he would gladly accept full, unsolicited manuscripts from us. Too bad I didn't have a decent one to send him at the time.

A few years later Harry Potter transformed the children's book industry. Suddenly there was big potential money to made on kids books and everyone and their mother thought it would be easy to write them. Twilight hit next and wannabe writers jumped on the YA vampire gravy train. The publishing houses that used to take unsolicited manuscripts from unknowns were buried under their wizard-y, vampire-y slush piles.

Agents, who rarely used to handle children's fiction authors, took notice (money to be made!) and now, for the most part, they are the gatekeepers who wade through the slush piles. That editor at Simon & Schuster, by the way, is a senior editor these days and won't look at anything but agented queries. The other big houses are the same. If you're a children's writer and you want to take the traditional path, you probably need to find yourself an agent. (Good luck!)

And don't get me started on e-books and Amazon and publishing house mergers and bookstores closing. The times they are a-changin' in the book publishing industry. Which could (and does) freak anyone associated with the business out. Are books going the way of the dodo? Or is this just a (painful) bump in the road as stories leave the paper format behind and the industry scrambles like Music and Newspapers to figure out how to keep making money as the mode of transmission changes?

I'm choosing not to freak out. Maybe I am like one of those resistant, optimistic horse and buggy owners who will insist to my dying day that automobiles will never catch on--but I think stories and the people who tell them will stick around. How these stories will be published, and what "published" even means in this new age--that, I have no idea.

At the moment most of the writers I know are still firmly and/or shakily on the traditional publication path, but I've met a few people who are striking out and trying self-publishing and having great success. An entire industry is springing up to help these writers--editors, book designers, publicists, etc.

There's a little tension between the two groups, which sort of reminds me of the tension I used to feel when I was a working mom, and later, when I was on the other side as a stay-at-home mom. I never understood that animosity. I mean, we were all moms trying to do our best raising our kids. What was the point in blaming, or being envious, or griping about which group had it harder?

And when it comes to writing and publishing books, the bottom line, I think, is that we all want to tell good stories and get them out there, somehow, into readers' hands (or onto readers' electronic devices).

So that's the longest intro to a blog series ever, but what I'm going to do over the next few weeks is interview writers about their various paths to publication--ask them, specifically, the burning question that my naive fifteen year old self would've wanted to know:

How do you get published?