Jody: How did some of your first illustrations become published?

Nikki: Right now I have eighteen different published pieces and have worked with three different publishers. The first three books were with very small presses, one not even in existence today. These were also what I call risks. I was starting to build confidence in my work and didn't feel as though I had a strong portfolio, but as I was diving into blogging and other social media outlets, my work was getting seen and apparently shown around too.

I was contacted by the first two publishers. I did not seek them out. I say "risks" because the publishers were very small and they paid little to nothing, but I felt I would get better portfolio pieces if I worked with them. Which is exactly what happened. 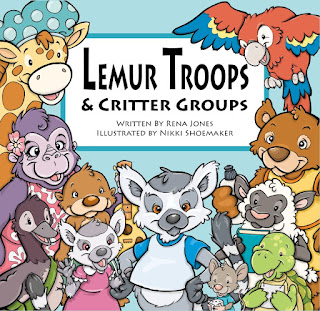 Jody: You mentioned being on social media. Did you do any other kinds of research--join a professional organization or attend conferences--that kind of thing?

Nikki: I was slow to take part in my local chapter of SCBWI because of the location and meeting times and I still haven't gone to a conference (then, because of money, but now, because conferences seem to fall on or near the end of deadlines). I tried critique groups, but partners I was paired up with only ever said to me: " I love it!" or "It's so CUTE!" I graduated from Columbus College of Art and Design, and I was used to being given very thorough critiques. Simple praise wasn't helping me get better or evolve, so I ceased participating.

Nikki: No. It's the social networking and other connections that allowed me to reach the success I have now as an illustrator. So, I try to stay on the ball with those things. Though my website is in horrible need of updating! :)

Jody: But lucky for you--you have the artistic design skills to make this happen!

Back to those first three books, what kind of time frame is involved? In other words, how long did it take from finished project to publication?

Nikki: My first book, What's Wrong with Mud? (written by Gillian Colley), was assigned to me in the fall of 2007. That book was created using cut paper, and I had a full time job working as a graphic designer in a library system, so I finished illustrations about ten months later and they were sent to be photographed and then put into layout and design.

The book was released in spring of 2009. The next two books were trade paperbacks and only took a year from beginning to print.

Jody: Was all this wrinkle free?

Nikki: Well, I will say that I was very upset at the printed versions when I got them. The print quality was awful, the design and layout were horribly done, and the company did not honor their contracts of paying royalties. So, though the illustrations in those books were some of my best at the time, I was ashamed of the end result.

Jody: This is probably the point where it's helpful to have an agent...

Nikki: Yes. And here's where the luck and my love of social networking comes in. I was still in the stages of building confidence and being really critical of my work and portfolio. I was NOT looking for an agent, but I was sharing a lot of art on my blog and participating in lots of illustration listservs and trying to get some feedback that way. One fall day I received an email from an agent saying she had seen my work and had been watching my blog. We had a few conversations, I had a lot of questions and she had really wonderful answers!

It took me a few weeks to make a decision. The first contact made me feel so excited, but the overwhelming part of having to find that confidence of being good enough to have an agent was a lot at the time. I did end up signing with Anna Johnson of AJ & Associates in October of 2009. She immediately took as much art as I could give her, and she used it in promos for visits to different conferences and things she had planned in showcasing her illustrators' works. 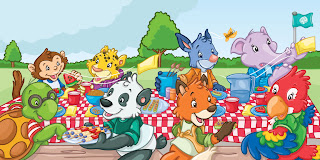 It was less than a month when she called me with a big project for BrightStart Learning called Learnalots. In three years time, the Learnalots were developed, 15 published educational materials are on the market, and I am working full time on more to come!

Anna doesn't do much in terms of representing me today because she knows I am swamped with work for the Learnalots, but she is still my biggest cheerleader. I have taken on a few side projects and she is always there for me when I have questions about contracts, negotiating pay, art critiques and so much more! I adore her and have made a lifelong friend in her too! 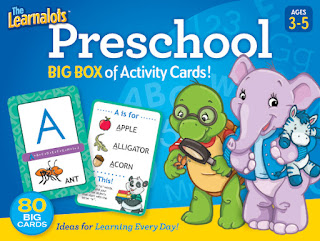 Jody: Walk me through a typical book deal from an illustrator's point of view.

Nikki: All of my experiences have been different. The first book was a competition, though I did receive an advance and was under a contract. As I said, the following two were with a publisher who never sent payment for royalties. My agent quickly advised me to NEVER work with that company again. And I use that artwork how I want to, disregarding the original contract.

Now I work with a wonderful mass market publisher. I am considered a sub contractor, and I have so much work with the development and future products in the Learnalot brand line that it's like having a 9-5 job and working overtime. I do have a contract with that publisher, and the team of people I work with there are incredible. We call ourselves the dream team, in fact. It's been the best experience and I hope in continues long into the future. 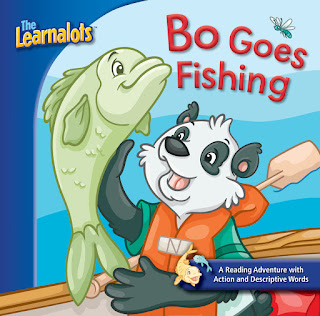 I do take on side projects on occasion. I am about to work on a small book for a hospital. The process for me now: they come to me with idea, I ask a lot of questions about the project, then I form a price quote for the work. I explain in fine detail what they get from me in that price--I even list number of edits and what additional edits will cost. I find this helps a client really understand the value of the work we do.

They sometimes want to negotiate cost, but I rarely have to do that since I have added in the detailed synopsis of the work I do for that cost. I always ask for 1/2 of quote in advance of me starting the work. And I always put in the contract that I will be paid the remainder of the quote within 30 days of delivery of final art or project.

This has worked very well for me and I am happy to say, I have never had to wait months for final payment. I don't generally work with royalties in mass market and with side projects.

Jody: Tell me a bit more about the editing process.

Nikki: I always review and ask a lot of questions on content or scripts when I first receive them. Most things get edited before I start to work on the sketches. I always allow two edits in sketch phase and one to two edits in final artwork before tacking on extra charges for revisions.

Jody: I am assuming illustrators have marketing and promotional work to do.

Nikki: I am not required to market things I work on, but I do. I always ask permission from the clients or publishers first (I have never been told no) and then I run with it. I was in public relations for a library system for a few years, so I have lots of ideas for marketing! I mainly use social media, but I do visit my local shops and book stores and libraries. I get to know the management staff at each and I try to keep them informed. I don't shove it down their throats like a door to door salesperson, but I do share and try to get others excited about such products.

I have not worked with a big, traditional publishing house. At this time, my successes with the mass market and education industry allow me to not have to and I am really enjoying working for a different market. I plan to continue this path for as long as it lasts!

Nikki: I don't concern myself too much with this as of now. My publisher takes our products and the Learnalot brand to Bologna, Frankfurt, BEA and more each year and he always gives the team a great status report when he comes back. He has strong enthusiasm for our side of the industry right now, and I trust that instinct in him.

Working in libraries for so many years, you realize just how many people rely on the libraries to get free resources. This makes me believe that the industry will of course change, but it won't disappear. Writing and illustration is everywhere you look. You just have to think outside the box to see where the future might lie. This will take you far, I think! 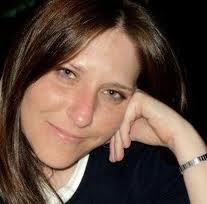 Illustrator Nikki Boetger lives in the Central Ohio area. You can find out more about her work on her website NikkiBoetgerIllustrations.com