Writer, teacher, and editor Kim Griswell on the importance of making connections in the children's book publishing world

Kim: The little pig in Rufus Goes to School trotted along an interesting path on his way to being bound in book form. When I wrote the book, I was the coordinating editor of Highlights for Children. Because of my Highlights association, I met many wonderful writers and illustrators. One of those illustrators was the very-accomplished Valeri Gorbachev who has more than 50 picture books to his credit. 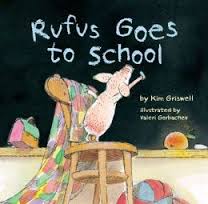 After I wrote Rufus, I showed the manuscript to Valeri. He said, "Kim, you're a good writer. I don't know why your books aren't getting published. I like this little pig. I would like to illustrate your book and maybe that will help you get a start."

Jody: Okay, that is NOT the typical path for a writer of picture books--teaming up with an illustrator beforehand!

Kim: I know. Manna from heaven, right? So Valeri did a dummy (which is a mock-up of the story with rough illustrations) and we submitted it to one of the editors he'd worked with before. The takeaway point here—in writing for children, connections matter. Make friends! Join SCBWI. Go to Highlights Foundation workshops and connect with writers and editors. Don't just sit in your writing cubby all alone and think that's enough. These days, it's not.

Jody: And as your story shows, you never know what connection will make a difference. What happened next on Rufus's journey? How much time time did it take to get that finished manuscript to publication? Were there any wrinkles along the way?

Kim: Valeri and I were just talking about this. I think I wrote the first draft in 2007. The dummy and manuscript were first submitted in 2008. The editor said she loved it and asked for a revision. She liked that, too. She said she was taking it to acquisitions, and then...nothing.

For more than two years.

We emailed. We called. We emailed again. We wondered if she'd died (but maybe she walked into one of those thin spaces of yours, Jody!) or left the company or...who knew? So, yes, a wrinkle—the kind you'd see on the face of a 107-year-old crone, I'd say.

Jody: Kim, you're cracking me up. But seriously, I get it. The submission process. The wait. The anxiety. Sometimes, just as we think we're about to cross over, we hit that stalled point. If you don't joke about it, you'd wallow in despair.

For those writers still playing the waiting game, what's your advice? I guess what I'm asking is how did you get Rufus off that editor's desk?

Kim: Well, I started thinking that I probably needed to have an agent. Once again, I used one of my connections. My Highlights colleague Marileta Robinson was being repped by the Herman Agency. I asked if she'd give me an intro to her agent to see if I could get my work read. Her agent, Jill Corcoran, took me on.

As it turned out, Ronnie Herman took Rufus under her wing as she reps all the picture books at her eponymous agency. Ronnie managed to wrestle the manuscript and dummy back from the editor who'd been sitting on it. I think it might have been 2010 by then. And she started sending it out. She placed it pretty quickly with Sterling, and I could not be happier. The folks at Sterling are amazing!

Jody: 2010... and the book is out finally, this month. That IS a long journey to publication. But like you said, it ended up in the right home. What are some of the details of the book deal that you can share?

Kim: My book is traditionally published, and I did get an advance, as did Valeri Gorbachev, my illustrious illustrator. The manuscript went back and forth a few times with my editor, but there were just small changes at that point. It had already been revised and revised again. I saw Valeri's new dummy and finished art and galleys and had the opportunity to read through for errors. (Didn't find a one!)

Jody: What about marketing and promotion? What does Sterling do and what do they expect you to do?

Kim: Sterling seems to have a solid marketing, sales, and rights department, from what I saw recently in a visit to their offices with my editor. They've featured Rufus Goes to School on their fall catalog, which is a big deal. Art from the book appears at the beginning of each catalog section.

They took Rufus to the book fairs at Bologna and London and had Rufus with them recently at BEA in NYC. They're doing a bookmark and a book trailer, all of which is a really big deal to me.

Everyone at Sterling seems so excited about Rufus and they are talking him up at conferences and online. 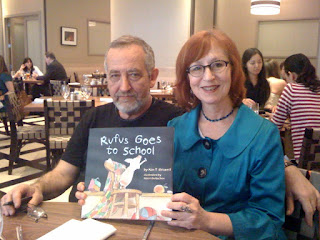 I'll do whatever I can to help. Rufus has shown up on my facebook page and in some tweets and retweets. I plan to do whatever signings I can and will be available for school visits. Rufus traveled with me recently to The Barn at Boyds Mills where I introduced him to every writer I could pigeonhole, one of whom has already had me write a note to her students to share with them when she gets a copy of the book. Whatever Rufus needs, I'm here for him!

Kim: I don't know about everyone else, but here's what I see: books are being published. More books than ever! Great books. Good books. Mediocre books. Life-changing books. Quiet books. Print books. Ebooks. Books serialized on blogs and in tweets. And don't be afraid of digital publishing!

Instead of preventing kids from reading, being on the Internet actually makes them bigger readers than ever of all kinds of things.

As for print? It's alive and well, from wacky informational books (don't miss the books I edit such as The Enchanted Toilet and Uncle John's Smell-O-Scopic Bathroom Reader for Kids Only!) to snuggle-up-in-the-lap picture books. 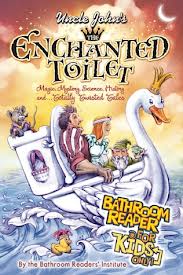 It's a great time for books and a great time for writers, especially those who are willing to dig deep to learn the craft and seek editorial guidance (whether at a big publisher or through an epublisher). 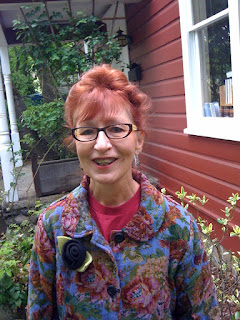 Kim Griswell is an author, editor, and writing teacher. A former editor at Highlights for Children, she's now the developmental editor for Uncle John's Bathroom Reader: For Kids Only books. She's published over two hundred stories, articles, and columns. Rufus Goes to School is her first picture book. You can find out more about Kim on her website www.KimGriswell.com

Email ThisBlogThis!Share to TwitterShare to FacebookShare to Pinterest
Labels: How to Publish a Book 101 Blog Series, Interviews, Kim Griswell, pathways to publication, Rufus Goes to School, The Enchanted Toilet