Lost Boys/Lost Girls: Coming of Age in YA Fiction

When I was in college I rarely had time to read for pleasure, so if a contemporary novel made its way onto my radar and into my hands, you can bet there was a huge cultural buzz around it.

Now that I think of it, the only two novels I read back then that weren't required school reading were by Bret Easton Ellis: Less than Zero and the follow-up, The Rules of Attraction. These books were not termed young adult--the young adult pickins' were slim in the 80's--but I think they both would be classified that way now. 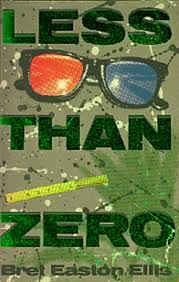 Ellis wasn't much past his teen years when they were published.

Both novels sort of blend together in my mind, but from what I remember, they feature college age kids floundering around with friendships and sexual relationships (including some questioning of sexuality), experimentation with alcohol and drugs, and rebellion against parents and societal expectations. Also, there's a very cool present tense, stream of consciousness narration that I had never seen before.

My early 20-something self thought these books were brilliant and truthful, hilarious and heartbreaking. And I totally bought into Ellis' cynical, subversive vision of 1980's America.  It was like the guy was speaking to me and my friends, waking us up to how things really were. And weirdly, instead of feeling depressed about it, we felt a gleeful defiance. 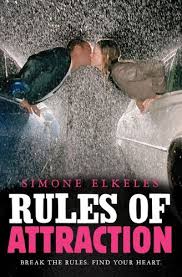 I'm not saying that Ellis explicitly was calling anyone to action or trying to be the voice of his generation, etc. (or maybe he was. Who knows?) And I haven't read the books in years, so this is all filtering through a haze of memories, but my takeaway feeling after reading the books was that this messed up world I was about to inherit didn't have to be that way. I could do things differently. I could change things, reject the numb, boring, cruddy, ridiculous lives of my parents' generation and do it all better. I am Generation X, damn it!

(I say this with a bemused, weary sigh, which I suspect means that I am way beyond YA and firmly in MA--Middle Age. ha ha.)

Here's something funny about coming of age books: they scare the crap out of adults, one of the reasons you'll see articles lamenting the "darkness" in YA literature. We old fogies who've forgotten what it feels like to BE A TEEN don't want our kids to read about scary stuff that happens in our world.

We don't want them to even know about it.

But I think kids need these books, books they can carry around with them and pass on to each other, books that speak to their lost, floundery, scared, angry selves.

The classics in the Coming of Age genre are books like Huckleberry Finn, Catcher in the Rye, and A Separate Peace. I read Of Human Bondage recently, and let me just say: Whoa. Talk about dark. Talk about exploring the depraved tendencies that lurk in the human soul. Talk about books we should keep out of impressionable teen hands.

That book, published in 1915, features (SPOILER) a main character who rejects the uptight Christianity of his childhood and tries on other lifestyles for size before settling on a new way of thinking that would likely make his dead parents roll over in their graves.

I suspect the book was banned big time.

Some others good Coming of Age books of past generations off the top of my head:

Since I am not a teen, I can't say which novels published today are likely to resonate with teens, but a few I've read recently might strike a chord:

Everything John Green has written. Latest: The Fault in Our Stars. (But my fave, still, is the first novel I read of his, An Abundance of Katherines.)
Story of a Girl, Sara Zarr
Thirteen Reasons Why, Jay Asher
How I Live Now, Meg Rosoff. Also, an undiscovered masterpiece in my opinion: What I Was
All You Never Wanted, Adele Griffin
Dr. Bird's Advice for Sad Poets by Evan Roskos
The Beginning of Everything, Robin Schneider
Where Things Come Back, John Corey Whaley

and the one I finished just the other day...
September Girls by Bennett Madison 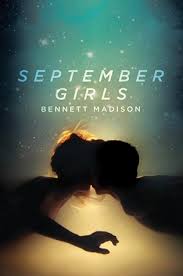 Like the very best of coming of age books, it's got a lost kid at its center. Sam is a depressed, cynical mess trying to make sense of his life. His mom's taken off before the start of the book, apparently on a quest to find herself. Sam says she ran away to a place called Women's Land (which I thought was a metaphor, but turns out it is an actual place. I'm picturing a feminist commune where weary moms don't have to clean up dishes or launder their sons' smelly socks. Sad fact: I sorta related to the mom here.)

Sam's dad is lost too, and as a way of grappling with the loss of his wife, he takes Sam and his older brother, Jeff, a stereotypical Animal-House-style frat boy, to the beach, to that mysterious realm known as "The Outer Banks in North Carolina." And this is where the magical realism of the story kicks in.

There are beautiful girls EVERYWHERE, sexy blonds literally throwing themselves at Sam (and not, strangely, at Jeff.) So this is all new and interesting for Sam, who's pretty inexperienced when it comes to women, and honestly, a little freaked out by the attention.

I'm not giving out spoilers except to say the Girls are not what they seem. Which is not to say that the girls are "bad."

The brilliance of this book lies in the way it makes us question our assumptions of gender roles--how girls and boy are expected to act and to relate to each other in a society that flings so many mixed messages at them.

Look for it on the Printz Award list this year.

Also, on the list of books that concerned, outraged parents will want to ban.