Musings on a First Criticism

I received my first negative review of something I'd written when I was in tenth grade.

Up to that point, I'd gotten lots of lovely gushy praise. It helped that I wrote mostly for myself and rarely showed my pieces to anyone else. Teachers, when I was growing up, did not assign creative writing in class. Anything I wrote for them was extra credit. They didn't mark up those papers. They'd scrawl the word Nice across the top. Or, Good.

So, I had many years to feel positive thoughts about my writing and that encouraged me to keep doing it.

That is, until 10th grade. My English teacher that year was a nun who was big time into grammar. We learned the hell out of the parts of speech. Lots of underlining of the subject once and the predicate twice.

I was the only kid in the class who enjoyed that. Sister taught us how to diagram sentences, and I was awesome. She would throw the most complicated sentence at me and I could break that sucker down. 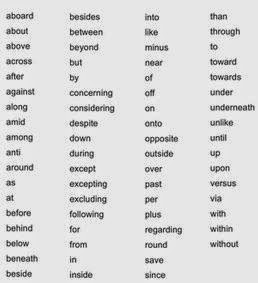 My love for Sister wavered when she introduced prepositions. It was her belief that prepositions could not be taught. The only proper way to learn them was to memorize all of them in alphabetical order. She pointed out the list in the grammar book and told us that our assignment was to memorize the list. In a week, she'd have us recite it in front of the class. If we made one mistake, we would get a zero.

I raised my hand and explained that I understood what prepositions were and I felt that I could identify them without going through this memorization exercise.

Sister smiled and told me I was wrong.

When class was over, I went to the guidance office and asked to be taken out of the class. The guidance counselor was sympathetic. She putzed around in a file cabinet (no computers then) and informed me that I'd been mistakenly placed in a lower tracked English class. I should've been in honors. Unfortunately, there wasn't much that could be done to change the schedule.

Luckily, Sister taught both English classes. The solution was that I would keep going to my class, but meet with Sister once a week to do the honors level work. Weirdly, I was okay with that. Sister gave me a list of novels to read and a packet of work, and I kept diagramming sentences and underlining predicates. I also failed the preposition quiz. Proudly.

One of the assignments for the honors class was to write a story. I had never written a story for school before, but I was excited about it. By tenth grade I called myself a writer. I had been keeping a journal for years. I had written two full-length novels and a stack of shorter things, some finished, some not.

I wrote a story that I was sure would wow Sister. It was literary and complicated, heart-wrenching, with allegorical overtones.

The story was called "I Am the Lamb" and it was about a girl who grew up on a remote farm in Iowa (I laugh at this now because I had never been to Iowa and knew absolutely nothing about farms, but whatever.) The girl had a hideous birthmark on her face, a birthmark so gruesome that her parents kept her isolated on the Iowa farm. They said it was because she was special, but the girl suspected that the parents might be ashamed of her hideousness. One day a white sheep on the farm gave birth to a litter? group of baby sheep (I wasn't sure on the lingo) and one of the lambs was black and the mother refused to nurse the lamb because it was different. The girl was given the task of killing it.

In case you don't see the parallel, I helpfully pointed it out at the end of the story when the girl makes a moving speech to her parents about how SHE IS THE LAMB.

The day I met with Sister to discuss my story, I was eager to hear her thoughts. We met in a small office with no windows. I sat down and Sister stood, and I waited for her to gush about my brilliance and creativity.

Instead, she yelled at me.

My story, she said, was wrong. No parents would ever treat a child the way the parents in my story did.

I walked out of the room, embarrassed and ashamed.

The rest of the year was full-blown crappy. I kept reading books on the honors list, but my heart wasn't in it. Diagramming sentences had lost their luster. The kids in the grammar class asked for my homework and fought to sit next to me on test days so they could copy my answers. I let them.

I didn't write a story for a teacher again until college. I never looked at the Lamb story until a few weeks ago when I unearthed it during a recent purging of my house. I was almost afraid to read it. I felt sick just looking at the title. I assumed it was a terrible story.

I read it the way I might read any student's work. The Iowa farm. The horrible birthmark. The story itself, surprisingly, wasn't as terrible as I remembered. Nice set up and character development. Dialogue. Description. Very few grammatical or punctuation errors.  If the writer was my student, I might praise all of that. Maybe ask a few questions. Like, why'd you write about farms and lambs when they're, uh, not something you know that much about?

I can't imagine mentioning the over-the-top symbolism and drama. Fifteen-year-olds sometimes write stuff like that.

It's interesting how the voice of your first critic worms around the voice in your own head, twists and winds, until the voice becomes one voice, and that voice whispers in the back of your mind: You can't write about this.

The book I am writing now is full of things that would make Sister cringe. It's dark and edgy and weird. Fantasy bleeding into reality and the other way around. Characters doing cruddy things to each other. Parents hurting their children.

I've been writing the book on and off for 13 years. For a variety of reasons, I could never get it "right." Some days I work on a passage and I hear what I'd always thought was my editor voice, whispering: No. This is wrong. You can't write this.

Lately, I've been shaking my head, telling the voice to shut up. Guess what, Sister, This is my story and it's not wrong.

Watch me. I'm writing it. 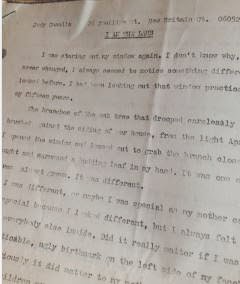