Because It's There. Also, a word about SCBWI

I can't remember the mountain climber guy's name. But a reporter asked him why he wanted to climb Mt Everest and the guy answered: "Because it's there." 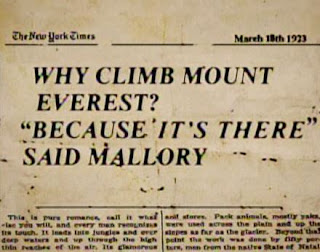 Side note: I just googled it and it was George Mallory. Side note #2: the George Mallory story is fascinating. In 1924 he tried to climb to the top of Mt Everest and died on the way up, and for 75 years people wondered if maybe Mallory had made it to the top and died on the way down (which would've made him the first to reach the summit, as opposed to Sir Edmund Hillary in 1953). In 1999 a team found Mallory's body and hoped it would settle the question once and for all. But it didn't. You can read all about that controversy here. Side note #3: I know the guy who was on one of teams in 1999 who went up Everest to search for Mallory's body. Andy Politz. (you can read all about him, here)

I met Writing as a kid, pretty much at the same time I met Reading and discovered that I could use Reading to escape my not-so-happy little life. Writing, kindly enough, gave me the same joy and pleasure as Reading, but with a side dish of power. When you write, I quickly figured out, you not only get to fall into a story, you get to create the story you're falling into.

It was a nice romance for many years. Writing and Me. When I was a kid, a teen, a young adult, I spent a lot of time with Writing. I got good at being with Writing. I was praised, more often than not, and that made me want to keep writing. But mostly, I enjoyed writing for Writing's sake.

Then I went to college and grad school and Writing and I hit our first rough patch. Reality. And reality meant criticism and analyzing and studying and revising and most of all, Writing meant Work. We had a pretty solid foundation though, the two of us, me-n-Writing, and the relationship felt like something I wanted to work on. So I did.

Until I was out of school and long out of the practice of writing for my own pleasure, and without the deadlines and assignments and structure of school, and minus the joy of it, Writing and I broke up for a few years.

We started dating again, on and off. But the emphasis in our relationship had shifted from Pleasure to Work and finally to the Product of the Work, otherwise known as Being Published. After a few years of that, I was published. And that was cool.

But by then Writing and I had a love/hate relationship. It's hit me lately, as I've written four books since publishing one, that maybe Publishing is not the summit of my particular mountain. Which has led me to question:

So, what IS? And why should I continue to climb?

Several years ago I went to the SCBWI (Society of Children's Book Writers and Illustrators) conference in LA. It was a month before my book Thin Space came out. Reviews were rolling in and they were good. I was walking around in a glow-y daze of joy. At last my dream had come true and my book, MY BOOK!! would be on library and bookstore shelves and I was ON MY WAY, the culmination-- no, the beginning of my life as an Author-- with more books coming out and critical acclaim and money and fame and woo hoo hoo, etc.

I was happy, is what I'm saying.

One of the speakers at the conference was Matt de la Pena. He gave an amazing speech about writing and his childhood and his late discovery of books and all of the ups and downs in his writing journey. The part of his speech that snapped me out of my glowy daze of joy for a moment was when he started talking about his mission as a writer.

We have to figure out why we're doing this, he said, and he told a story about a kid in a hoodie sitting every day at a bus stop and how the kid was kind of rough around the edges, maybe even borderline thug-looking, and the people in all of the cars going by didn't look at the kid. It was like the kid was invisible. Matt de le Pena drove by every day too and he saw the kid and it made him realize why he was Doing This:

To give kids like that kid a voice, to tell their stories, and to get people to see those kids.

That was Matt de la Pena's mission statement, and he said all of us in the audience should have one too.

Four years later and four potentially never-to-be published books later, I think I get it.

Publishing is not the summit. Publishing was never the summit. Writing is the summit. And I am writing because that's my mountain and it's there and damn it, it's what I do.

It's what I've pretty much always done. I know I will continue to do it regardless of the end product because writing is how I want to spend my time. It's work and joy. It's puzzling things out and sitting on hot painful stoves. It's challenging and maddening and fascinating and boring and heartbreaking and laugh out loud funny.

It gives my life meaning.

Over the past few years it's spread out beyond me as I've been talking at conferences and in classrooms and teaching writing classes and talking to other writers and seeing that they too are struggling with the same kinds of things I've been struggling with.

So this is a long, meander-y, roundabout way of saying I've figured out my mission statement.

And to that end, I am writing my way through Book Number 5 and finding it, as usual, challenging and maddening and fascinating and boring and heartbreaking and laugh out loud funny.

Also, I recently took over as Regional Advisor of the Central/South region of SCBWI. I joined the organization in 2005 and the group was there for me as I learned more about the craft and business of writing children's books and now I want to give back.

Hope to see you there.