Portrait of the Artist as a Self-Doubter

The first rejection derailed her. Maybe it was a sign from the Universe. QUIT, she imagined the Universe shouting. ORDINARY PEOPLE LIKE YOU NEVER BECOME PUBLISHED WRITERS!

(Although, she did reread the rejection letter several times-- true, it was the typical form letter This story does not fit our present needs...--but the editor had scrawled a note across the bottom Nice work! Try us again!...)

She waited six years before she tried again.

Sometimes she missed writing, but most of the time, she was too busy to think about it. She worked full-time as a teacher. She had a two year-old running around at home. Writing was something she'd done as a teenager and in college, but she'd grown up since then. She'd put away childish dreams.

A fellow teacher passed along a brochure about a writers conference in town. Wanna Be a Published Author of Children's Books? Come to our conference! Meet a Real Live Editor!

For an extra fee the editor would critique the first three chapters of a novel.

She had never written a novel. It seemed like a ridiculous idea. When would she have time to write novel?

She paid the fee. She wrote the novel during her planning period. The conference was cool. She ate lunch with the editor who worked at Simon & Schuster and she told him that her toddler's favorite book was Chicka Chicka Boom Boom, which was published by Simon & Schuster. The editor told her that he'd just signed a new author and he was so excited about her and her book. It's called Running out of Time, he said. It's by a woman named Margaret Peterson Haddix.

I will have to check that book out, she said.

Later, she read the critique of her three chapters. The voice is strong and the dialogue is realistic and there is some real emotion in the chapters... but (and she knew now there was always a BUT) it is unclear who the main character is. It's hard to tell what the conflict is. Maybe you can try to--

She read Margaret Peterson Haddix's book when it came out. It was so good. She read other books in the same genre. They were good too. Why did she think she could Do This?

She waited another four years.

Now she had two kids. Sometimes when her son was at pre-school and her baby daughter was napping, she'd work on a story. One of the stories was published in a magazine but she couldn't manage to sell another. To have something to do during nap-times, she signed up for a writing correspondence course. She wrote a book for the teacher, who enjoyed it.

She sent it out to publishing houses and it was rejected.

The Universe was shouting at her again and this time it was saying: THIS IS A SILLY HOBBY!

She wasn't sure. Should she leave her kids for a week? She'd miss her daughter's birthday, which happened to fall during that time. Also, both of the kids took part in a zillion activities and she was the Carpool Mom. Maybe Writing was a thing she once did and maybe now it was time to let it go?

She went on the retreat. The first night everyone in the small group introduced themselves and talked about what they were working on. When it was her turn, she said her name. She said what she was writing. She realized it had been years since she had admitted this out loud to strangers.

She felt shivery, shaky. If she was writing, did that mean she was a writer? 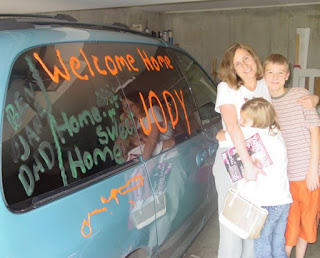