Writing Words in Times of Plague

There's a doofball character in the book The Plague by Albert Camus.

A terrible plague sweeps across the land and the town is suddenly quarantined. Anyone who happens to be outside for the day can't get back inside. Everyone inside is trapped. Soldiers guard the walls.

The people in the town begin to act the way you might imagine they would. Some freak the hell out. Many strike out at others. A few rise up to help.

Police officers and government officials try to maintain order. The doctor takes cares of the sick and dying. The minister prays and offers consoling words. Most people retreat to their homes.

The truth is he's not even much of a writer.

He fiddles with the words in one sentence, the first sentence in what he dreams will be his magnum opus. Meanwhile, the people in the town are struggling. Consumed by terror. Numbed by horror and death. The good among them trying to cope against what feel like impossible odds.

And here is our writer, entering the scene every now and then to share his story.

The novel, the sentence, the words are his passion. A mental challenge. A puzzle. A cause for frustration, and at times, delight and joy. He will get this sentence "right" one day and he will move onto the next sentence. One day he will reach the end of the book, and everyone will celebrate with him.

The other characters shake their heads in amusement at the writer. But they pause to hear the latest version of their friend's sentence, and then they go back to their urgent and seemingly endless work,

and the writer goes off to fiddle with his words.

The people inside the walls continue to live and die. One small town suffering from a plague, a place where there is no escape except death.

They grow sick, they despair, they mourn

They steal, they blame, they attack, they kill

They retreat, they hide.

They help. They care. They give.

They build. They plant. They write. They paint. They dance.  They dream. 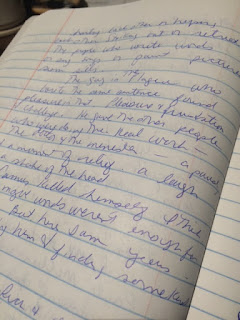 Email ThisBlogThis!Share to TwitterShare to FacebookShare to Pinterest
Labels: Camus' The Plague, writing