Why I March in the Women's March

I am going to the Women's March in DC this Saturday

because this election and the upcoming administration feels like an assault on everything I believe.

I wanted to make a protest sign to articulate all of my thoughts, all of my reasons for protesting.

No-- to a man who boasts about grabbing women and girls by their private parts, who views women and girls as objects to rate and denigrate, who thinks it's disgusting when women breastfeed or have to go to the bathroom, who jokes about dating his own daughter, who calls women he doesn't like pigs, who parades into dressing rooms of underage girls and thinks that's funny and his right because he was born wealthy

No-- to a man who mocks people who have disabilities

No-- to a man who encourages his supporters to look at others with suspicion, to harm others, to bully others

No-- to a man who threatens journalists, who wants to silence his critics

No-- to a man who shows contempt for Science, who doesn't believe in Climate Change

No-- to a man who surrounds himself with white supremacists, who takes advice from billionaires and Oligarchs and Russian leaders

No-- to a man who mocks the poor

No-- to a man who misleads his supporters, who makes promises he can't possibly keep, who wants to make America great again but can't explain what that means or WHEN that means and refuses to level with his supporters that it is impossible to go back to a mythical time when everything was "great" because everything WASN'T great for everyone.

No-- to a narcissist who can't empathize with anyone but himself, who has done real damage to most of the people he has come in contact with-- black people who he denied apartments to, women he sexually assaulted, workers he refused to pay, students he misled in his fake university, and all of us he has lied to-- about his status as a billionaire, about who he owes money to, about his multiple bankruptcies, about his many scams, about his entanglements with Russia--

But, all of that wouldn't fit on my sign.

So I just wrote this: 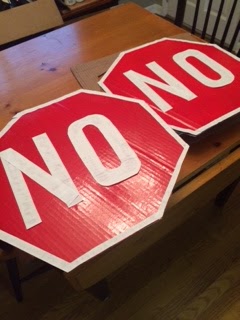 When I return from the March, the real work begins. That is when I will say Yes to actively working against him and every monstrous thing he stands for.