Write in the Morning/Protest the Regime in the Afternoon: Notes from the Resistance

Except for the signs people are waving around, this could be a PTA meeting.

The group is chatty, friendly in the way that we know we all have something in common.  I bump into acquaintances. I introduce myself to strangers. And then it's down to business. When you go to a town hall for your congressman, there's an agenda. Speakers. Laughter when someone mentions she's not being paid to be here. She's holding a wriggling child.

If I was being paid to be here, she says, I would've gotten a babysitter.

Our congressman doesn't show up. Maybe it makes him feel better to imagine that someone is paying us to talk to him. Maybe he's afraid we're an angry mob.

Spoiler alert: we are not.

I don't ask any questions at the town hall. I don't raise my hand to speak. I listen. I'm curious about how all of this works. I am new to protesting. Until a few weeks ago I didn't know what a town hall was. I barely knew who my representatives were. Now I have all of their numbers saved on my phone.

I have no idea if it makes any difference when I call them, leaving voicemail messages or every once in a while, getting through to chat with a harried intern.

When my kids were in elementary school, my husband used to joke that I was a full-time volunteer. Too bad you don't get paid for this, he said. This is like a job.

I was elected to serve on a site-based school board for five years. I edited the school newsletter. I was on the PTA board. I can't even count how many meetings I went to. Some were contentious. A few were stressful to the point that I thought about quitting. I commiserated once with a fellow volunteer and she shrugged off my weary outrage.

Just remember why you're doing this, she said. Because you care about your kids. You care about everybody's kids.

A few weeks ago at the Women's March in DC, I walked around for hours holding a sign above my head. I was so fired up I felt like I could hold that sign up forever. When I returned home, I wanted to keep on marching with it. Maybe I'd carry it with me when I walked the dog around the block.

I imagined my neighbors' raised eyebrows, and drove downtown to protest outside my senator's office instead.

This was totally out of my comfort zone. I had to plug the address into my GPS. I had to park in a creepy parking garage. I climbed the stairs up from the underground garage and wondered how in the world I would even find the protest.

No worries. It was the group of 150 people or so gathered across the street. I joined them and raised my sign overhead. An hour later I got lost trying to find my car. I paid five bucks for parking and laughed thinking about how I had basically just paid money to protest.

It's weird, and sad, that my president says that I, and people like me, are being paid to show up at town halls and to march at rallies. Besides the fact that it is an easily provable lie, it's disrespectful. He's making the assumption that I wouldn't DO this-- care passionately about something-- unless I was being paid.

At one of those contentious school board meetings, I spoke out against the principal's proposal to do away with foreign language classes. This was a middle school that housed a Spanish Immersion program for a small group of students (including my son). The proposal was to get rid of foreign language for the kids in what they called "the neighborhood." The gist of the principal's argument was that foreign language classes (and later he'd throw in stuff like art and music) were extras, frivolous, especially when you took into account that many of the neighborhood students were struggling in reading and math. Anyway, it didn't affect my kid, so why was I even opposing his plan?

At the Town Hall of our absent congressman, someone speaks about the importance of being involved in the community, of reminding our representatives that they work for and serve their constituents--us. Another person speaks about the environment, how she was raised in the shadow of a coal plant, how she's now fearful of the administration's rollback of environmental regulations. Another person speaks about her experience as a Muslim American, how she's lived in our community for ten years, how she volunteers at her mosque to serve meals to the poor, how she is hurt and afraid by the tone of the president about fellow Muslims.

One by one people in the room stand. They're terrified they will lose their healthcare. They worry about the dismantling of public education. They're sad about the disparaging comments made about women and minorities and the disabled.

The morning after the election, a friend rolled her eyes and asked me, When are you going to get over this?

She may as well have asked me, When are you going to stop caring?

I didn't answer her back then, but I will now: 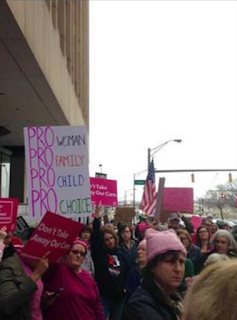