(Not) Just a Girl: The Messed-up Floundery Yearning Teen Creations of Carrie Mesrobian

When you read a Carrie Mesrobian book, you meet the kids who tend to be overlooked and ignored in other young adult books. 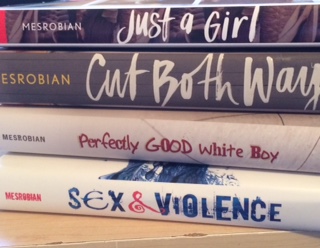 These are the kids who slouch in the middle rows of the classroom. The C-student kids who work after school at thrift stores or in restaurant kitchens or at the local tanning salon. They're not the star athletes, the popular kids, the valedictorians. They don't know where they want to go to college. Actually, they're not sure they want to go at all. The future is vague.

Hell, next week is vague.

What's there to do, if you're one of these kids, but live in the moment? Hang out with your friends. Go to beer-y parties after the Friday night football game. Hook up with a girl friend or a boy friend. Or both.

Rianne, the main character in Mesrobian's newest novel Just a Girl is underestimated by everyone. She's used to living in her high achieving older sister's shadow, being lectured to by her mom, and overlooked by her dad. Her friends are cool and close, but lately they're growing apart as senior year grinds on and everyone's gearing up for what they plan to do after graduation. Rianne has no idea what she wants to do after graduation.

It's not helping that she's been told explicitly, and implicitly, that she is bad --a reputation that dates back to a sexual experience with an older guy her freshman year and is solidified after another boy Tells All. Rianne never tries to refute it or even explain.

Like a lot of girls, I suspect, she internalizes the views her peers have of her, and simply goes on.

She's dating Luke, a kid also known for his "bad" reputation-- but lucky for Luke, boys don't get the same crap for stuff like that. Anyway, he's a fairly decent guy. Maybe Rianne will end up with him. Maybe she'll end up sticking around in their small town, a place that feels more and more stifling.

Or maybe she'll jump on an opportunity that no one, including this reader, saw coming, and even now, weeks after I've finished reading the novel, still disturbs me.

It's so hard to explain this book-- and all of Carrie Mesrobian's books-- because nothing really happens. There are no easy answers, or even any answers. It's the questions that get you, that tunnel around in your head while you're reading and long after.

Where do you go when no one expects you to go anywhere? 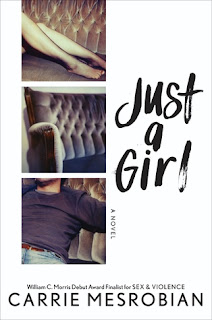 *Just a Girl is out March 28th, 2017. If you, dear reader, are a librarian or teacher and would like a signed, advanced copy of this most excellent, disturbing, heartbreaking, beautifully written novel, post a comment below. I'll pick one at random, and send it your way.