*Trying to write this blog from my phone so bear with me if it's wonky.

The beer in Prague, they say, is cheaper, than water. This is true. Too bad I don't like beer.

Correction: I loathe it. I was joking to my friend on this trip that I haven't had a beer since I was seventeen years old, but the truth is that first beer probably doesn't count. I took one sip. Put it down. Walked away half gagging. I was at a party where I only knew one person and was feeling extremely self conscious. Later I overheard people mocking whoever it was who left behind a beer un-drunk.

I mean, who the hell would do that? they said, appalled.

When you travel, when you walk through an unknown city, miles from home, when the conversations going on around you are in a multitude of languages and none of them are your own, you tend to have thoughts like these, flashes of memory, long ago humiliations in your non-drinking beer past. 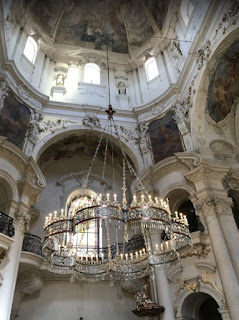 I walk into so many churches here they begin to morph into one another. The church with the massive chandelier hanging over the pews, the cloister with a bearded woman statue nailed to a cross, the small tomb-like church with a statue of a black Madonna, the church that displays what they call "The Holy Infant of Prague," something that looks like a china doll wearing an elaborate poofy dress.

People around me pay coins to light candles. They kneel at the altars. They bless themselves and pray as they have prayed, in many of these churches for hundreds of years. I am overwhelmed in these sacred spaces.

Is it my once upon a time Catholic school girl upbringing? The cloying scent of incense drifting in the air? The familiar feel of holy water on my fingers as I bless myself? The prayers buried in the recesses of my brain leak out and I whisper the words I thought I'd forgotten.

Oh my God these cemeteries. Ancient tombstones falling over in the Jewish ghetto. The neat rows of raised garden beds behind an old Catholic Church. Someone is still putting out fresh flowers on these graves, dropping small stones, lighting candles. 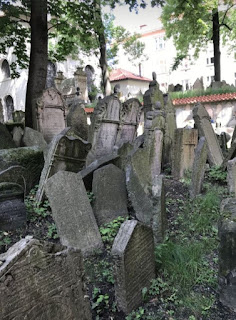 I feel weepy walking back and forth over the Charles Bridge, the snippets of music playing. The heartbreaking "Moldau." And, weirdly, one night, a joyful rendition of "Mamma Mia." Beggars kneel, bent over, heads bowed, elbows on the pavement, holding out their up turned hats. No one gives them money. Some of them have dogs. Every dog makes me want to cry, and what does that say about me that I tear up for the dogs and not for the men?

I decide I am getting a damn beer.

I hear a band outside a pub playing Led Zeppelin's "Immigrant Song." I listen for a while with the crowd on the street and then I force myself to go inside. The man sitting by the only empty stool speaks English. He knows the owner, he says.

Haha, this guy is a funny one.

He recommends a beer, and it is enormous. I brace myself and take a sip.

Turns out the guy sells Aloe Juice. Whatever the hell that is. He's from England. He owns a factory in Bangkok. The band has veered from playing Led Zeppelin to monologuing about oppression, something something about how we're all being brainwashed by Abrahamic theology?

Half of the enormous beer finished, and it hits me that this aloe juice salesman may possibly be hitting on me.

He blabbers on about the dark turn the band has taken and how aloe juice can apparently be found in your upscale supermarkets and how much he hates hippies.

I finish my beer (!!!!) and then excuse myself to go to the bathroom. I sneak out another exit and walk quickly through the crowded streets, freaked out at first that the creep hippie-hating aloe juice guy will follow me, but he doesn't.

I walk the crowded streets, buzzing with my first beer, listening for random snippets of music, people prattling in every language but my own. 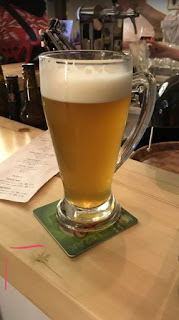