Last weekend I went to a wedding.

I haven't been to a wedding in a while. There was a point a long time ago when I was just out of college that all of my friends were getting married, one after another, and my new husband and I attended what seemed like a bazillion ceremonies and partied at the various receptions, snarfing down the free hors d'oeuvres and clinking our champagne glasses and laughing on the dance floor as we did the Electric Slide with our friends' goofy middle-aged parents.

This particular wedding was a new milestone for my husband and me because it wasn't our friends getting married, it was our friends' son, a boy--

okay, a man-- we've known since he was four years old when he played with our son at preschool. Our son-- also, apparently, a man now-- was one of the groomsmen.

He flew cross country with his girlfriend to attend the wedding, and our daughter and her boyfriend flew in from out of state, and my husband and I drove in from our neck of the woods, and for a too brief, two-day period, our family was all together, celebrating the wedding of this boy, now man, we've known forever, and his new lovely bride, and our dear friends,

This could make me tear up if I think about it too much. How time moves faster and faster. How only yesterday I was picking up my son from pre-school while his baby sister toddled around my legs and I struck up a conversation with another young mom, also waiting with a little girl toddling around her legs. The two little boys playing on the floor with Legoes somehow morphed into the two men standing side by side on a church altar. The little girls tearing every single outfit of the closet to play dress-up, now the young women gracefully walking in insanely high heels and laughing as they leapt for the thrown bouquet.

But I didn't think about any of this last weekend.

I was there, days early, to help my friend prepare for the wedding. I told her that I would do whatever was needed and what was needed was setting up tables for a rehearsal dinner and making a grooms cake shaped like a sailboat and buying plants at Lowes and baking garlic bread.

It also meant assisting her sister, a professional florist, as she created elaborate flower arrangements and corsages and boutonnieres.

I have never made an elaborate flower arrangement or a corsage or a boutonniere in my life. I don't even know the names of most flowers. I stood pretty much in awe the entire time as the sister florist built these creations, trying to be of help but most likely getting in her way. She would ask for a Something Something kind of a flower and I would tell her I had no idea what that kind of flower was and she'd point it out and I'd laugh and say, "Oh! the one that looks like a Horton Hears a Who flower?" And she'd look at me like I was a weirdo. 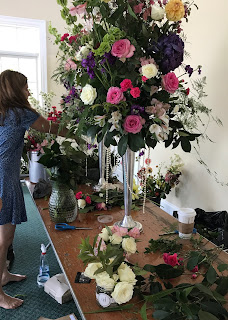 But later, when the clock was ticking down and there were still many more corsages to assemble, she'd call out, "Hand me a couple of those Horton Hears a Who flowers" and I'd get right to it.

There is a task in the Artist's Way -- (Yes, I am reading the Artist's Way again because the joy of writing has once more slipped away and I am depleted and my creativity is sapped, probably due to the hellish political landscape we're all living in that has made writing feel pointless) but anyway,

the task is to list, without thinking about it, five imaginary lives--five alternate reality choices for yourself if you could go back and start everything over.

I wrote without thinking: Florist.

The next task was to do something related to that Imaginary Life, and I chuckled to myself, because when in the world would I have the opportunity to be a florist?

Several days later surrounded by flowers that I didn't know the names of, in service to a friend who was about to watch her only son marry, as I searched for greenery and poked stems in foam and pressed a spray of baby's breath against a white rose and pierced it with a pin, I remembered.

The next moment the arranged flowers were on the altar, the boutonnieres on the groom's tux, on my son's tux...

Another moment and the ceremony was over, the hors d'oeuvres were eaten, the Electric Slide notes faded, the wedding guests departed, the flowers 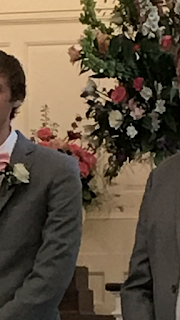