The Gift of an Aloe Plant

The other day someone gave me an aloe plant.

How it happened was this: Back in June, I wrote a blog post about a creepy Aloe Juice salesman guy, and a woman named Shari, a writer who had attended one of my workshops, commented on the post that she knew something about aloe plants, and we started corresponding, and Cut To:

she offered to grow me an aloe plant.

It took several months, with Shari updating me occasionally, to report on the plant's progress. One plant died and she had to start all over again. But eventually, she had a plant and she messaged me that it was ready for the hand off.

We agreed to meet for coffee. Shari chose a place that was five minutes away from me but quite a bit of a trek for her, and I realized as I rode over that I didn't really know this woman and what a nice thing it was that she was driving down to give me an aloe plant.

In the parking lot of the coffee place, she lifted the plant out of her car carefully. It was bigger and more gangly than I had envisioned. I was afraid to handle it. Was it okay to put it in my car while we had coffee? How would I take care of this thing? I know nothing about aloe plants.

But Shari gave me instructions and assured me that it would be fine, and if it died, she would grow me another. Shari has been doing this thing on Facebook called 20 Good Deeds in 20 Days x 2, a way to stand against hate, and I have been following her good deeds. I asked her if she was going to count giving me an aloe plant as her good deed for the day.

She said, she hadn't even thought of it as a good deed.

On September 11, I listened to an interview on Fresh Air with 9/11 first responder, John Feal, a man who was working on the pile a few days after the towers fell when an 8000 pound steel beam dropped on his foot. Feal almost died and in the months that followed, he realized that he did not have adequate healthcare to pay for his medical bills, and later he discovered that most of the first responders were in the same boat. Many of them died from injuries. many more (2000 people) began to die from illnesses traced back to their 9/11 work, leaving behind astronomical medical bills.

Feal began to advocate on behalf of the first responders, meeting with nearly every congressperson and basically being blown off by many of them. But eventually he prevailed, and a law was passed to protect him and others in the same situation. In the years since he lost his foot, John Feal has been to nearly 200 funerals. He's held hands with men on their deathbeds and promised to take care of their families. He donated a kidney to a stranger.

When the interviewer asked him why he did the things he did, he said: "I will never understand how we can be in a position to help someone, and not do it."

At the coffee place my new friend Shari and I drank our coffee and talked about writing. As I drove my five minutes home, my gangly new aloe plant sitting beside me in the passenger seat, and weirdly looking more like a new pet than a plant, it hit me again what a gift it was.

The idea. The long process of nurturing and raising. The drive down to meet me. And all of that for someone who was basically a stranger.

Like many people over the past year, I have come to realize that our country has become so divided. Maybe those divisions were always there, but now they are laid bare.

We demonize each other. We scream at each other on social media. We don't take the time to listen. Even friends and family members have cut each other off. I have done this too, believing that the divisions are too great to bridge. And maybe they are.

I don't want this to be true.

Maybe I am not the kind of person who will donate a kidney to a stranger. Or maybe I am. I don't know! But can I stop screaming on social media? Can I take the time to listen? Can I water my aloe plant.Take a cutting and grow another plant.

Give it to a stranger. 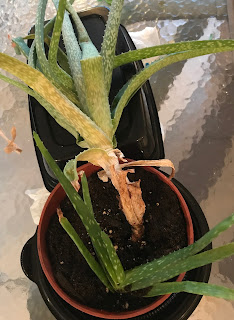