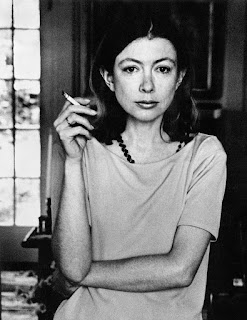 "...I had not been able to work in some months, had been paralyzed by the conviction that writing was an irrelevant act, that the world as I had understood it no longer existed. If I was to work again at all, it would be necessary for me to come to terms with disorder..."

Sometimes you stumble on a book and find the words you need when you need them,

and apparently, I needed to hear the words of Joan Didion.

Joan Didion, if you don't know-- and I didn't-- is a novelist, essayist, journalist, memoirist, the author, more recently, of the acclaimed National Book Award winning The Year of Magical Thinking, but also the author of many pieces written in the 1960's and 70's and 80's, about the counter-culture and the Manson Family, about music and wars, sex and violence, grief and death-- pretty much the whole shebang of human experience. 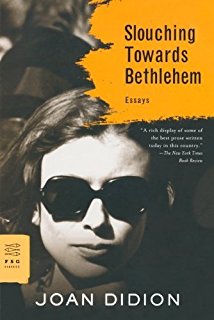 I just happened to be browsing in the essay section of the library and opened one of her books and read the bit about disorder on the very first page and thought, yes, THIS, exactly.

The book, called Slouching Towards Bethlehem, alludes to the poem "The Second Coming" by William Butler Yeats.

Things fall apart; the center cannot hold
Mere anarchy is loosed upon the world...
The best lack all conviction, while the worst
Are full of passionate intensity.

and if you're like me, a former English major with words like these rattling around inside your head,

Yeats wrote the poem in 1919 after World War I had ended and it probably did feel like the end of the world then, to him and to a lot of people. (They didn't know, of course, there'd be another huge war twenty years later, and many many wars after that.)

But back to Joan Didion.

She wrote the lines above, the lines about coming to terms with disorder, in the 1960's. The Vietnam War was raging and Americans were watching it on the nightly news, the battles and blood overseas, and at the same time, watching battles and blood here, at home, as black people marched for their civil rights and policemen sprayed fire hoses at them and attacked them with clubs and vicious dogs, and cities were burning and teenagers were running away from home and dancing like loons in muddy fields.

Probably, it felt like the end of the world to Joan Didion, and to a lot of people.

She went to San Francisco and moseyed around the Haight-Ashbury district and wrote about the hippies and the anti-war protesters, and also happened to take note of their copious drug use and the sad fact that their toddlers were wandering around in diapers and occasionally dropping acid when their hippie parents weren't paying attention.

My point, and I do have one, is that Joan Didion reminded me what I once knew from William Butler Yeats, that there has always been disorder, that human beings, by nature, are disordered, and one of our tasks, while we are here, is to figure out how we are going to deal with that fact.

or maybe we will write a poem or an essay or a blogpost about it to remind people in the future, that while we may be disordered, and it really does feel like the end of the world, 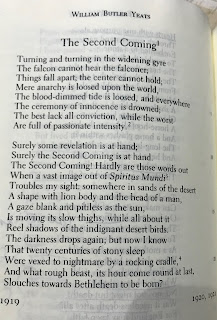