PREMISE: The day after Christmas and it's 5 degrees outside and no one wants to go anywhere and anyway, why can't we all just lounge around in our pajamas all day?

OBJECTIVE: Play all the games

Son - computer programmer from California and lover of history and games

Visiting Uncle - chessmaster and professional poker player; *he is the player to beat 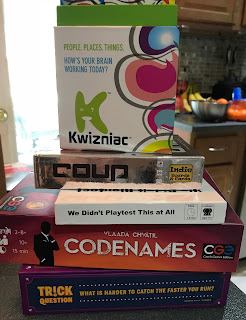 1. Kwizniac, because we can play and eat brunch at the same time. Basic gist of the game: guess the word on the card.

Challenge: The first clues are so vague, it's impossible to guess. Still, we all jump in with guesses anyway, even though each wrong guess means you lose five points.

We all lose a ton of points and move into negative number territory.

Winner, by a mile: Visiting Uncle

Consensus: decent game (after we change the rules and only take one point for wrong guesses)

This game is a blur. I think I was making dinner during the rule-explaining? Something to do with guessing words based on a one-word clue? Also, I needed my reading glasses to see the words on the cards and that was annoying.

Consensus: Everyone seemed to enjoy this one?


3. "We Didn't Playtest This at All (a completely ridiculous card game for 2 to 10 fun-seeking people)"

Disclaimer: I suspect this is a drinking game. 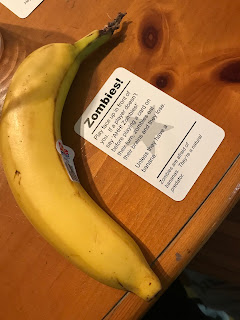 Gist: Everyone gets two cards. If you lose your cards, you lose the game. The stuff written on the cards is inane and often contradictory.

"Anyone who says the word "their, there, or they're" loses."

"If you play this card, everyone loses."

"Place this card in front of you. If a player doesn't say 'Ahh Zombies!' before playing a card on their turn, zombies eat their brain and they lose. Unless they have a banana."

I sneak into the kitchen and grab a banana.

Consensus: This is a drinking game

We team up for this one. Girls against the boys. Someone reads a question and the players grab an Us or Them game piece to decide who will have to answer.

The questions are logic questions and brain teasers and some people's brains are fried by now, (okay, MY brain is fried by now), so daughter and I decide on the strategy that we will always grab the Them piece and make the other team answer.

I realize that I can't understand game directions when they are read to me, or maybe it's just been a long day of playing games and making multiple meals and cleaning up after multiple meals, because when Son reads the game directions for this game, my eyeballs literally roll back inside my skull.

The only solution is to play the game and hope to figure it out on the fly.

The gist: you have two characters and you're trying to kill everyone else's characters by lying and/or tricking people into thinking you're lying.

There's a long explanation for why this is so and yadda yadda ya Palace intrigue and influencing your rivals, but it doesn't really matter.

My strategy: Always tell the truth, which I am happy to say does work! I win!


We end the day still in our pajamas, reading Kwizniac cards and eating leftovers.