Eight books I love this week

(In no particular order)

1. This Book Just Ate My Dog! by Richard Byrne 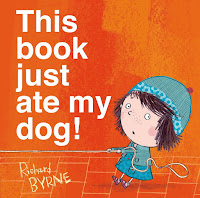 Bella takes her dog for a walk and it disappears into the crease of the book. On each page, more characters disappear as they search for the missing dog, culminating in a literal shaking of the book to release them.

Eight-year-old Jasmine is tired of her older sister Sophie doing everything first. When it’s time to celebrate the New Year by rolling mochi balls, a tradition in their Japanese American family, Jasmine has the perfect plan to help—and to do something even Sophie has never been allowed to do.

(I love little Jasmine's voice. Kind of a cross between Ramona and Junie B. Jones. Plus, there's a recipe for Mochi included at the back of the book, which I appreciate.)

CeCe is starting a new school, trying to make new friends (and avoid a couple of not-so-good friends) and at the same time, she's learning how to be a deaf girl in a mostly hearing world. This is a graphic novel with a perfect melding of text and pictures (the book was a runner up for the Newbery Medal).

(It's geared toward 8-12, but it can be read as an adult memoir-- the author based the story on her own experiences. Also, I got a kick out of all of the 80's pop culture references--  Partridge Family, The Waltons, The Beatles.)


4. Long Way Down by Jason Reynolds

Will’s older brother was shot and now Will has stepped into an elevator in his building, prepared to shoot the boy he assumes is the shooter. Over the next 60 seconds as Will wrestles with his trauma, grief and need for revenge, the elevator stops, floor by floor, letting on the ghosts of Will’s community, others who have been destroyed by gun violence.

When the elevator doors open at the end of the book, readers are left to come to their own conclusion about what happens next. A gut-punch of a read.

(I read this in 45 minutes-- it's told in verse, so it's "easy" to read-- but oh my God, here I am three weeks later still stressing about this kid.) 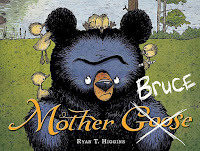 Bruce is a crotchety bear who just wants to be left alone to make his gourmet egg recipes, when one day, the free-range, organic goose eggs he's purchased (the pics show him shopping with a shopping cart in the forest) hatch. Fun fact about goslings? They imprint on the face they see first.

And that, unfortunately, for Bruce,

(This is a picture book that adults may enjoy more than kids, although the pictures of the baby geese are darling.)


6. Here We Are by Oliver Jeffers 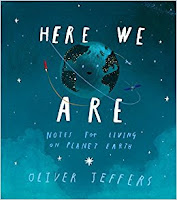 I love this picture book so much I want to give it to every newly expecting parent I know. Jeffers wrote the book for his own two month old baby, as basically a Welcome to the World introductory love letter.

Gorgeous pictures of space and earth and water, people and animals, accompanied by a loving and humorous voice explaining everything you need to know as a new inhabitant of our planet.

(This first time I read this book to a child, he was mesmerized and I burst into tears.)


7. The Princess and the Packet of Frozen Peas by Tony Wilson, illustrated by Sue deGennaro 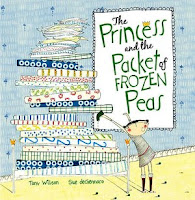 An update on an old classic. Our prince is skeptical that having a prospective marriage partner sleep on a bed of twelve mattresses with a pea hidden underneath is the best way to choose a mate. In fact, it's how his brother chose his bride and that princess is just a little too finicky.

Maybe the answer is one mattress and a bag of frozen peas?

(Laughed out loud reading this one. And glad to see that it broke gender stereotypes. Spoiler alert: the princess had a rough day playing hockey and appreciated the bag of frozen peas.)


8. This One Summer by Jillian Tamaki, Illustrated by Mariko Tamaki

Story of two girls who've been friends at the same lake every summer, but now one is growing up a little faster than the other and struggling with some family dysfunction. I picked this one up on the advice of an editor and guessed (wrongly) by the picture on the cover and by flipping through it (it's a graphic novel, so it has a comic-book look to it) that it's a book for younger kids.

It is not. It's a complicated, moving, heartbreaking story about girl friendship, puberty, the growing awareness of how girls are perceived by men and how they often internalize that.. and hurt each other.

This one blew me away. A winner of the Printz Honor for the writing and a Caldecott for the illustrations. Give it to your older than 14 year old daughter. But first, read it yourself. 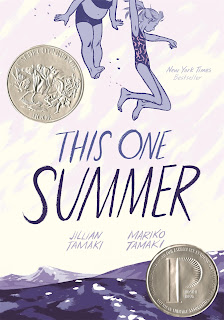 Email ThisBlogThis!Share to TwitterShare to FacebookShare to Pinterest
Labels: El Deafo, Here We Are, Jasmine Toguchi, Long Way Down, Mother Bruce, The Princess and the Packet of Frozen Peas, This Book Just Ate My Dog, This One Summer