Someone pulled the fire alarm every day

when I was teaching in a high school, and everyone would groan because we knew it was a false alarm,

except for that one time when it wasn't, (a chemistry experiment gone wrong) and we all had to stand outside in the cold rain. And that other time, when there was a tornado drill, only weeks after a tornado blew the roof off the high school two miles away, and even the cool kids were freaked out, the alarm blaring,

they crouched, shivering, against the interior wall, their arms over the heads, one of the football players shouting at me, Ms Casella, why are you standing there? Get down!

I could handle the tornado drills and the fire drills, but my old childhood terror of fire, long buried, resurfaced when we had to practice the Lockdown Drills, because they were more likely to happen than a fire or tornado.

We all knew that any whack job with a gun could come strolling into the school. The administrators told the teachers lock your doors, huddle the kids into a corner. And in the unfortunate situation of a Lockdown happening during a class change -- grab whatever kids you could, pull them into a room, lock the door.

Whoever was left outside with the gunman would have to fend for themselves.

I could imagine terrified kids scurrying in the halls, searching for hiding places, and oh my God, what if it was your little boy or your little girl caught outside the locked door? Think of the nightmares you could have practicing that, the trauma of a drill, never mind the trauma of the real thing.

So, I've been going to Moms Demand Action for Gun Sense in America meetings, even though my kids are long grown and I am no longer teaching. I'm like a lot of people, apparently, past the point of being horrified by gun violence and looking for a way to make it stop.

Things I didn't know: the group was started by a mother of five, Shannon Watts, after a 20 year old man shot 20 first graders and 6 teachers at Sandy Hook Elementary School, and has grown to four million members. Things I wish I didn't know: there have been 1607 mass shootings in America since Sandy Hook-- 239 school shootings .

The only goal of Moms Demand Action is to end gun violence in America.

The group works to reach that goal by advocating for universal background checks and by opposing any legislation that puts Americans at greater risk of gun violence. They support the Second Amendment and actively recruit responsible gun owners into the group. They are not affiliated with a political party.

You don't have to be a mom to join.

Also, you don't really have to do anything to join, except show up. And speak out against gun violence in America.

For example, writing this blog post might make you remember the terror you felt when you were six years old, the first time you watched a fire safety film in school,

how scary it was to see the students in the film running instead of walking, the ones falling and being trampled, the ones trapped inside in the blazing building, and every time the fire drill rang, you were freaked out and you confessed your fears to the adults in your life, adults who weren't always so With It when it came to listening, but in this case, they did listen.

In this case they said, don't be afraid. We're taking care of this problem for you. You don't have to worry about dying inside your school.

Moms Demand Action can't say this yet to our scared children.

The kids who survived the mass shooting at Marjory Stoneman Douglas High School in Parkland, Florida have taken it upon themselves. On March 24 in 659 places worldwide, they will march to raise their voices against gun violence in schools.

The Moms will be there too. It is the very least we can do. 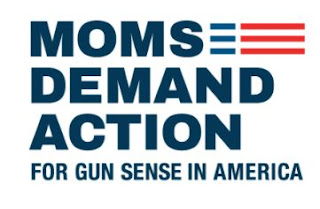