Riding in Cars for Coffee: (A pathetic comedy in four parts)

I am visiting my brother for the week,

and this morning as my niece and nephew head off to school and my brother heads off to work, I prepare to make coffee in his lovely newly renovated kitchen... and find, to my horror, that while my brother owns many small appliances, including a Crème brûlée maker and not one, but two juicers, he does not own a coffee maker.

On the plus side, there are approximately 543 Dunkin' Donuts in the area, and before my brother leaves for work, he throws me a set of car keys.

These do not look like any car keys I have ever seen. As in, they do not include keys.

I go out into his massive three car garage and sit inside a massive red car with the keys on my lap,  knowing that I am supposed to push a button?

I push many buttons. Nothing happens. I consider going back into the house. But, no. I need coffee. I can figure this out!

I push more buttons. I wave the key-less key around. Nothing.

I call my husband. I send him multiple pictures of the steering wheel and dashboard. He offers advice. None of which works. But, one clue. I thought you said the car is a Range Rover, my husband texts me.

Well, the picture you sent me shows Ford Explorer written on the steering wheel. 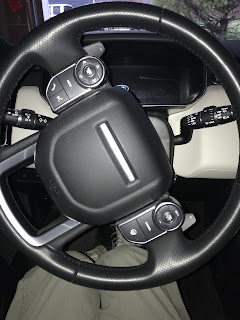 My brother has two red cars!! The other red car is a Range Rover or Land Rover or some kind of Rover? It is tucked behind a wall on the other side of the garage!

I sit inside it. I push buttons. Nothing happens. I text my husband. I send him more pictures of the steering wheel and the dashboard. He offers helpful advice. None of which works. I text Natalie, my critique partner, mostly to joke to her that I am an idiot sitting inside a car with no idea how to start it. Also, I NEED MY COFFEE!!

Natalie sends me a youtube video entitled "How to Use the Land Rover Ranger Rover Keyless Engine Start."

I watch the video three times.

And wah lah! The car starts!

Now, all I have to do is figure out how to turn on the windshield wipers.


(*note how many doofballs had to watch this video.)