The World's Gone Mad but--

I am not thinking about it. Instead, I spend my days chatting with my critique partner about the notes she's given me on my manuscript --the muddied up character arc and the inevitable info-dump in the first few chapters,-- and working in the bookstore -- the story-times with toddlers, the unpacking of boxes of new book--

my mind mulling over pressing issues, like, what if I can't figure out this revision, and how do I keep my dog from letting herself outside and getting stuck in the muddy backyard while I'm at work, and what should I make for dinner tonight?

Meanwhile, there was a nerve gas attack in Syria and entire families died in a stairwell, men and women clinging to their babies, their eyes glazed over, their ashen faces, and how terrified it must've been for them in those final moments.

I can't make sense of it.

Last year I read the book A World Gone Mad: The Diaries of Astrid Lindgren, 1939-45, because I am fascinated by how people grapple with the world during dark times. Lindgren, who wrote the Pippi Longstocking books, kept a diary detailing her experiences living in Sweden during World War II. 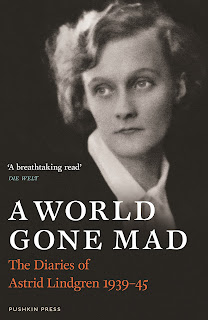 Most of the diary is day to day stuff like what she's making for dinner.

Which surprised me because when I think about people living back then, I imagine the war as being more present and all-encompassing.

Okay, Astrid Lindgren was lucky --and she knew it-- living in Sweden, a neutral country during the war, and therefore, mostly unscathed by the events. Sure, she read the newspapers and listened to the radio and was appalled, of course, by the atrocities, but for the most part, she was writing her Pippi Longstocking story and taking care of her kids and mulling over the food selection at the market, which wasn't bad, considering. She had a hard time making sense of it.

Yesterday I unpacked a box at the bookstore, a stack of new books, Indestructibles, they call them. A new invention to me. Books that your baby can crumple and chew. They're non-toxic! You can throw them in the dishwasher!

I marvel at these features, remembering my own babies chewing the corners of their books and there I was, clueless, allowing it, not worrying that the paper they were ingesting might be poisonous. Who knew this was even a pressing issue. 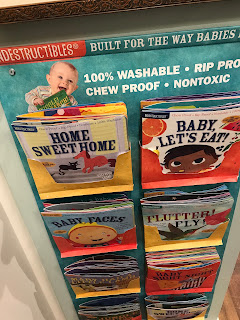 I wish I could ask Astrid Lindgren.

How is it that we live in a world that for some people ends with them clinging to their gasping terrified children in a stairwell, and for other people, the largest worry is the drooly bitten corners of a book?

Email ThisBlogThis!Share to TwitterShare to FacebookShare to Pinterest
Labels: A World Gone Mad, indestructibles, the Diaries of Astrid Lindgren