I don't remember how many people were protesting

ten? Twelve? The group was in the center of campus and I was walking past on the way to dinner. They carried signs and shouted but I didn't stop to hear what they were saying or do more than glance at the signs. Something about Apartheid, which I knew was a Thing in South Africa.

Something bad. But I knew this on an intellectual level only. I want to tell you I felt something more than mild curiosity, something more than Meh Whatever, as I continued walking by. But I can't remember feeling anything. The truth is I didn't care. I was going to say it was because I was twenty,

but the protesters were the same age, so that can't be the reason. Maybe it's because I was a mess, too wrapped up in my own problems to imagine other people's pain. Not a good excuse, but it's all I have.

I don't know when that changed. After having my children? After years of teaching hundreds of kids? Reading books? Studying history? Writing stories and living inside made-up people's heads?

Who knows. But back then, there was probably nothing anyone could say to make me veer off the sidewalk and join the group who cared about the suffering of other people.

So I am not going to try to explain to you why you should, except here's a story:

one day, I was picking up my four-year-old son from his darling little church preschool, a place he went to play two afternoons a week.The classrooms opened into a large hall and after the kids raced out, waving their still paint-drippy art projects, the moms would often linger,

chatting, holding our napping younger children, while the four-year-olds darted around our legs. Oh my God I loved those brief conversations with the moms, a moment of adult conversation after hours of incessant high voices, the whining the wailing the crying, the endless making and cleaning up of meals, the never-ending scooping up of strewn toys,

but for those precious few minutes after school, a connection, and this one day, a few of us got to talking, absorbed in who knows what topic, slowly walking along the whole time toward the door and out the door,

onto the edge of the parking lot, our kids still scampering around us, except at some point, I realized that my son wasn't there. (This is not a story of kidnapping or gruesome injuries requiring stitches, okay? So don't worry.) All that happened was

I stopped my conversation and walked back inside the building where I saw my son and he saw me at the same moment, and he ran toward me, hysterical, and I stooped down to hug him and he flailed in my arms and hit me,

which would have been embarrassing for the other mothers to see, except I didn't care

what they thought. All I could think about was what I'd just seen on my kid's face. One moment, terror. Then a moment of pure relief. And then a whoosh of rage, at me, for allowing us to become separated. It couldn't have been more then two or three minutes that we'd even been apart from each other

but my little boy cried all the way home.

Now, twenty years later, I can still hear him crying, still see his terrified face, and I don't know why. I don't. I don't. But here it is, that face and somehow it's imprinted on other faces, 2342 faces and counting,

the children taken from their parents at the border, but those kids have not been reunited (yet?) with their parents, and if, when, they are, their suffering will not be over.

I am not so naive to think that holding a sign will make a difference, but I sure as hell know that walking by without a glance is no longer an option. 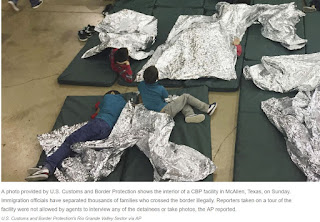