I didn't notice her foot was raised

The one time I visited the statue was on an eighth grade class field trip. We took a choppy boat ride to the island and climbed the windy stairs inside. I wasn't thinking about the statue, the history, the symbols, or give me your tired and poor, I was thinking of my own feet on the stairs because those stairs were scary, steep.

Each step, a grate you could see through with no back to it, so it felt like your foot could slide out the other side. Only room for one person, climbing single file, and once you were on your way up, there was no turning back.

I gripped the railing, kept my eyes on the person in front of me, tried not to look down, but every so often caught a dizzying glimpse of the space around me, the contours of the statue's body, the dress.

I just wanted to make it to the top. I was imagining the spacious crown, the view of the city (my first time visiting New York even though my hometown was less than a two-hour drive away) but when I finally made it, it turned out the space up there was cramped too, the windows in the crown too small to see much of anything. As we filed past, I peeked out, caught a flash of a green arm, the one holding the torch, the rivets holding it together,

and then we were filing our way down, this time scarier than going up because the person behind me kept knocking his knees into my back, threatening to tip me over the rail.

We saw other things on that trip. The stock exchange. The UN building. A stroll around the roof of one of the Twin Towers. I think you could see the Statue of Liberty from up there. But still, I never noticed the raised foot. There's a new book about it, a kids' book that we've been featuring at the bookstore where I work, but one I hadn't picked up until the other day. 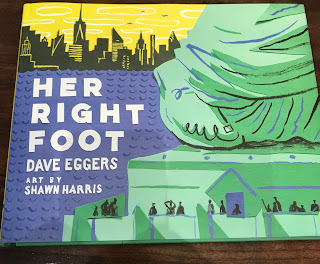 A fun story about the statue and who came up with the idea and how it was built, some facts I knew, and some I didn't, like, for example, that for the first thirty years, the statue was brown (it's made of copper and it took that long to oxidize); that the statue was assembled in Paris and stood there for a year before it was taken apart and reassembled in America.

So, the statue is, in a sense, an immigrant, someone in motion, if you remember her raised right foot. The author of the book makes us think about why that might be so.

If you stop by the bookstore, I will push the book into your hands. I will also hand you a tissue. 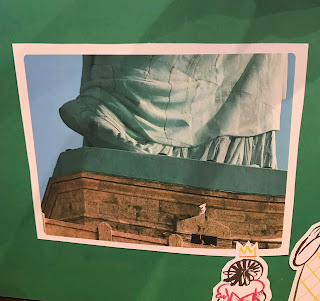