I wrote a book about Elvis once

It was the second book I tried to write.

I wrote it how I used to write short stories when I was in college. Take something true and twist it. In this case the true thing was my father died and I spent a lot of my childhood and teen years trying to understand why. I was seven when he died and he was thirty-four. He was sick my mother told me, and for some reason, I heard the words Heart Attack.

How Elvis came into it was a weird coincidence. He died on the same date three years later. This was big news even in Connecticut where I grew up. The cause of death was said to be heart failure.

I didn't find out the truth until I was older, that Elvis died of a drug overdose in his bathroom and my father died of an overdose in our living room. I don't know about Elvis, but my father's death was deliberate. That was the thing I was trying to understand. I was mad at him for a long time. And then I was sad. After a while it was a confusing mix of both. I didn't like telling people. I didn't like watching them struggle to come up with an I'm sorry.

Anyway, I wasn't grieving for my father. I didn't know him. If I was grieving, I was grieving for the loss of a father in my life. I had a stepfather, but that's another story. I just wanted to move on from it, but then the date would come around again and there'd be stuff on the news about Elvis dying and I'd end up thinking about my father and wondering why all over again.

This got more annoying when I lived in Memphis. Every year in that city there's a big lead-up to the day. A whole week called Elvis Week, culminating in a candlelight vigil at Graceland where mourners light candles and file past Elvis's grave. The people in Memphis jokingly call the week Death Week.

Somewhere along the way I started thinking there was a potential book in all of this. A girl whose father died the same day as Elvis, set against the backdrop of Death Week. Of course the climax would take place at the candlelight vigil.

The book morphed into something more than I'd envisioned when I started it, as books tend to do. Turns out the dead father had been an Elvis impersonator. No one could explain why he killed himself and the girl spends a lot of time dragging her best friend around to talk to her father's family and friends (conveniently at Elvis Week locations around the city) and with each conversation she comes away with new, conflicting information about why he did it.

It's a big quest for the Truth, but with a sad twist, because with the girl's obsession of figuring out her father death, she misses all of the signals her struggling best friend is sending. The night of the vigil, the friend attempts suicide.

It seemed like a very big important book at the time I was writing it, and I was pretty much consumed with it for three or four years, writing multiple drafts, doing research about Elvis, including attending a candlelight vigil (an interesting experience to say the least), but it all ultimately came to nothing. In the sense that the book was never published.

Sometimes I wonder what the point is of a project like this.

But I already know the answer. It was this book that taught me how to write a book. My first experience with editorial feedback and rejection. My first disappointment at putting a book away and knowing it would stay tucked away, forever unread.

But also my first glimpse of how the creative process works. How you can take pieces of your life,  the dark things you don't understand, the questions that can't really be answered, all of the emotions at the core-- that confusion and anger and grief-- and push through until something new comes out on the other end. 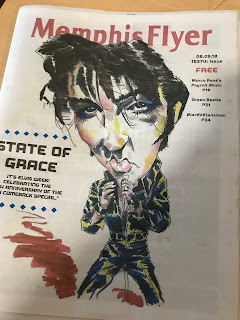