Last week I drove my daughter to college

well, okay, she did all of the driving. It was her car and I had an awful head cold, basically plunked in the seat beside her and blowing my nose through an entire box of kleenex.

It's a nine-hour drive to Memphis where she goes to school, and where I went to school once, and I was feeling foggy and discombobulated about the trip, wanting to be there for my daughter as she moved into her dorm her senior year, but also reeling a little, to be honest, at how fast the time had flown by since my husband and I had driven her down to start college, at how fast time had flown by

since she'd started high school
and middle school
and elementary school
and preschool for crying out loud,

and if we're being honest here, since before she was born, because I'd spent the nine months of my pregnancy with her in Memphis, and I have vivid memories of myself waddling around downtown when some random guy walked up and asked if I was about to give birth any moment because it was painful to look at me.

Sorry, random guy for being pregnant and out in public. But I digress. My point is that the passage of time was hitting me, possibly compounded by my head cold, but I was trying to rally, keenly aware of the precious time ticking away, those hours, in the car, chatting with my daughter

about her plans for the upcoming school year and her friends and her boyfriend, all the while blowing my nose, my daughter's playlist playing in the background, an interesting blend of music I'd never heard in my life interspersed with songs I loved when I was in college thirty years ago.

That night my daughter and I uncharacteristically indulged ourselves by staying at a touristy overpriced hotel downtown, the Peabody, an institution in Memphis, a place I'd been many times for parties and to do the touristy thing there, which is to see The Ducks. (These are real ducks that live on the roof of the hotel, and every morning they come down the elevator and march up a red carpet and swim around in the fancy fountain in the hotel lobby.)

Twelve years living in Memphis and I had seen the ducks march and swim many times, but I had never before stayed the night in the hotel or sat in the lobby and had an over-priced drink. But that is exactly what my daughter and I did on the night before she started school, me, with a clump of kleenex in my hand and her, just-turned-21 and suddenly so grown-up.

We perused the menu and ordered frou frou drinks and feeling loopy on cold meds, I asked the waitress to throw in an order of a two-dollar plastic duck, which was served, looking very adorable, on a nest of bar snacks.

The next day, I helped my daughter move into her dorm and it was pretty clear she didn't really need me there. She and her roommate knew how they wanted to arrange things, and later when we went grocery shopping and to Target, I ambled along beside her, a strange feeling coming over me that some kind of transformation had occurred in our relationship,

still mother and daughter, because we will always be that, but what is it when your child becomes an adult in the blink of an eye, and in the next blink becomes 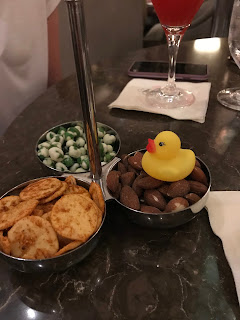 Email ThisBlogThis!Share to TwitterShare to FacebookShare to Pinterest
Labels: being a mom, car trips, headcolds, moments of growth, transformation