Why I March (part two)

A high school student asked me at the rally. She was doing a class project, an interview. Why are you here?

She asked my husband first, and he held up his hand and said, Wait. I need to think about it.

He was with me this time around. Actually, he was the reason I was there, at the march. All morning I kept changing my mind. It was cold outside. It had started to sleet. Soon, it would turn into a blizzard, the weather channel kept saying. Maybe the March would be cancelled. I mean, who would drive downtown on potentially treacherous roads to wave a sign in the freezing rain?

Come on, my husband said. I'll drive you.

I didn't wear my pink hat this time. I didn't even make a sign. I didn't know what I would put on a sign. Honestly, my head was sort of muddled up about why I march.

Two years ago, my first march, it was crystal clear. I was shocked by the election outcome, outraged at the treatment of women by the new president, disgusted and appalled by his views on anyone who isn't white, his bullying of people with disabilities and veterans and refugees. That day I stood with over 500,000 other people, who seemed equally outraged. I didn't know until the drive home that there had been marches in cities all over the country, all over the world, with millions of people sharing the same shock, horror, rage, and disgust.

Today, I have all of those same feelings of course (except shock). Plus, a whole new slew of things to be horrified by and enraged and disgusted over, too many things to fit on a sign.

Something you may not know about marches is how Not-Angry they are. It's just a group of people standing in the rain. A cross section of humans. Take away the signs, and we are any crowd gathered in a park. People in wheelchairs. People pushing strollers or carrying their toddlers on their shoulders. People walking dogs. Women and men. Black people and white people. Christians and Jews and Muslims.

The signs and chants are angry, clever, funny. We listen to speeches. Mull around with each other. Walk together.

After the first march I came home fired up. I joined political organizations and went to meetings and called my congressman and my senator so many times the people answering the phones knew my name. I gathered signatures on petitions and wrote letters to the editor and canvassed neighborhoods to remind people to vote.

I know on a logical level that this is what democracy looks like,

that change takes time, that organizations aren't perfect, that the people who run them are flawed, that every election will not go my way, that even so, it is worth it to stand up, to be a body in the crowd.

Standing outside in the cold, in the rain, I remember.

Why are you here?

I stand with women, my husband answered. My wife. My daughter. I stand with everyone here.

And you, she said, holding her phone out to me? 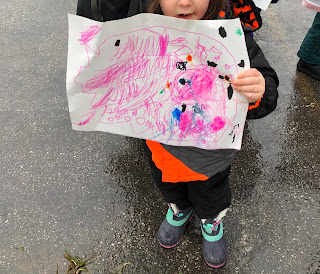 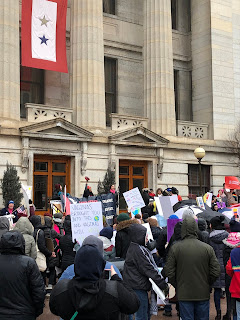 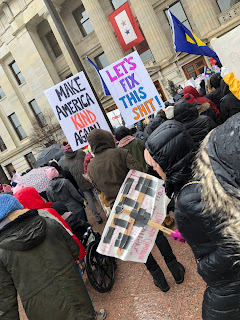 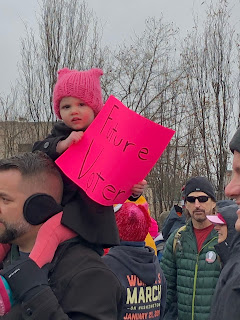