I was backing out of my spot in a parking garage. A friend and I had driven to Dayton to give talk to our writers' group there. It had all gone well and I was telling my friend I thought it had gone well. The talk was about motivation and how it is important to have writing goals.

I had a cold all last week and I was kind of out of it, so I'd been worried about the talk. Add to that, we were in Dayton, two days after a mass shooting. I said to the writers in the group, We need to write now, more than ever!

Police and security guards were on every floor of the library. The place closed promptly at 8:30 and a security guard escorted us to the parking garage. Another stood behind my car, watching us as we got in. At the end of the writing talk I had told the group to write down their goals for the rest of the year.

Don't set a goal that's not in your control, I told them. Don't say, Be published by the end of the year. Say: Write a first draft. I did the exercise too and immediately ignored my own advice: Finish my revision and go on submission in the fall.

I went through a bag of cough drops during the talk and had to keep stopping to blow my nose, but everyone acted like I was doing a good job. I hadn't given a talk like this one in a while. To be honest, I felt like a fraud. I haven't been writing since we moved. But even before that I was struggling.

I say we need to write now more than ever, but how do we do that exactly, when the world is falling apart around us? I wrote three books since my last book was published. Each one came close but ultimately did not break through.

Follow your dream, I told my writing group. Be persistent. Roll with the rejections. Keep writing.

In May I finished a draft of a fourth book. I'd overhauled it completely and reworked it over a two year period. Why wouldn't an editor snap it up in the fall?

Somehow I forgot there was a concrete post next to my car. I was looking at the security guard when I was backing out of the parking space. Drive slow, was what I was thinking. Be careful. The fourth book is not ready to go on submission in the fall. When I heard the deep grinding scrape noise, I was stunned. The concrete post was so big, and so suddenly and glaringly obvious.

The damage was bad, but luckily, only cosmetic. I tried to laugh it off with my friend, explained that I was usually a responsible driver. I'd had this car for over ten years and had never even gotten a scratch on it. But how did I overlook the concrete post? Was I distracted by the security guard? Had I eaten too many cough drops?

Why do I keep writing books that come close but don't break through?

Maybe it's time to try writing something different, my friend told me. The answer is so suddenly and glaringly obvious. 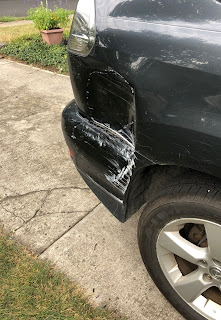 Email ThisBlogThis!Share to TwitterShare to FacebookShare to Pinterest
Labels: being a writer, rejections, The Writing Life, wake-up-calls