She wrote a tribute on Facebook. The young woman was in her class at the Antioch Writers' Workshop. Her name was Megan Betts. She was twenty two years old, the same age as my daughter. Last week my son texted something about driving through Gilroy every time he visits Yosemite. I said, What's in Gilroy? I had already forgotten that there was a shooting there, the one at the garlic festival. A week ago.

I had to look it up. Three people shot and killed. Fifteen injured.

Maybe this will be the tipping point, I told my husband.
I don't think so, he whispered back. Newtown should have been the tipping point. We were holding candles on the steps of the Ohio Statehouse Sunday night. A candlelight vigil organized by Moms Demand Action. Three hundred people gathering just as it began to rain. We huddled together under the statehouse eaves. One of the speakers said:

It's hypocritical to pray for a problem you are unwilling to fix.

In Dayton there was a candlelight vigil too. The governor spoke about coming together. The crowd yelled back at him DO SOMETHING!

The governor seemed flustered. Maybe he forgot that before the shooting happened, he was eager to sign a new law in Ohio to allow Conceal Carry with no permit or training.

In El Paso a mom, on her way to pick up her daughter from the airport, stopped at Walmart to run a quick errand. A woman buying school supplies for her five year old was shot holding her infant child. Her husband died too, trying to shield both of them. The six year old boy who was shot in the back at the garlic festival loved Legoes and Batman.

The young woman who died in Dayton was a good writer. My friend kept one of the pieces she wrote and shared a fragment of it on Facebook:

She was a creature of space. Created in the heart of a supernova, her soul had formed from the dust of celestial bodies and the light of the stars that threw life to the edges of the galaxies. Her eyes had seen the eclipses of worlds, watched the formation of the solar systems and the placement of the planets . . . she painted supernovas across the event horizons . . . she knew the maps of the stars . . .

At the vigil one of the organizers asked us to please return the candles before we left. Sadly, she said, we will most likely need to use them again. 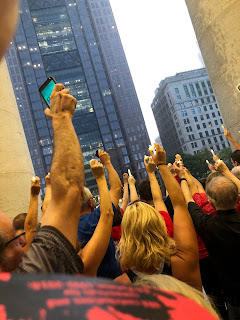