We dropped our daughter off at the airport

and did the whole goodbye thing. Hugs and pictures. Multiple wavings as she stood in line to go through security. And more waves as she turned to head toward her gate. We watched her walk down the hall until we couldn't see her anymore, and then there was nothing to do but go home. But we didn't want to go home yet.

There was too much traffic and we turned into the first restaurant we found off the highway.

I was thinking about the day we dropped our son off, his freshmen year. The college was close-ish to where I'd grown up and I remembered there being a clam shack on the beach, but we couldn't find it. I told my husband to keep driving while I craned my neck looking down the side streets. Everything was unfamiliar, the streets all dead-ending at the ocean, but no clam shack. Not far away our son was settling into his dorm room.

I knew he was excited and I knew he was where he was supposed to be and I knew it was all going to be okay, but still, I felt like crying. Finally, we found the clam shack. We got a table with an ocean view and stuffed ourselves with fried clams and shared a pitcher of sangria and told each other we were fine.

Whew, because we had tons of time. The night of sangrias at the clam shack we had a college freshman. We had a daughter who was only a sophomore in high school for crying out loud.

The restaurant off the highway does not serve fried clams. The view from the outdoor patio is of the shopping center parking lot. Our son has lived in San Francisco for three years. Our daughter is at the gate waiting for her flight. Soon, she'll be jetting across the ocean. She's going to graduate school in London. She'll be gone for a year.

I know they're both where they're supposed to be and I know it's all going to be okay, but still.

My husband orders us a pitcher of sangria and we tell each other we'll be fine. 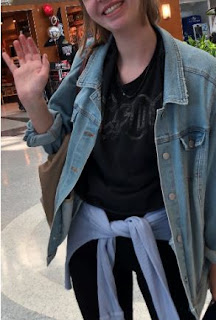 Email ThisBlogThis!Share to TwitterShare to FacebookShare to Pinterest
Labels: being a mom, empty nest, saying goodbye