The door in the garden

came from a prison. The old Ohio Penitentiary in downtown Columbus, or so the neighbors tell us. I don't know why someone would put it in a garden. People do strange things. I can see the door right now through my kitchen window. 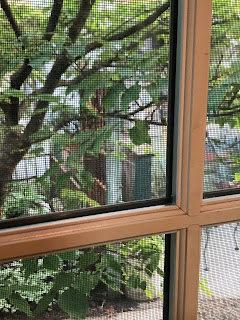 When I first saw it, when we were thinking about buying this house, I didn't look carefully. I thought it was an old gate. Another one of those shabby chic things cluttering up this house. Broken mirrors and peeling-painted windows hung on the walls like artwork. We got rid of all of that. The prison door, though, it's stuck pretty good in the garden.

It's a conversation piece, a friend told me. But all I can think about is a man sitting on the inside of a cell holding onto the bars. A murderer. Or some sad pathetic innocent person. I looked up the Ohio Penitentiary on Wikipedia and it’s an awful story actually. The prison opened in 1834 and operated until 1984. There was a fire in the 1930’s where 322 inmates died, some burned in their cells.

Over the years a confederate general did time there. And the mobster Bugs Moran. The writer O Henry spent three years in the prison for embezzlement, and is said to have written 14 of his stories in the place. A sociopathic doctor in the 1950s did research on prisoners, injecting them against their will with cancer cells.

The former prison was an abandoned building for a while in the 1980's. The city demolished it finally, in the 1990's. Today the area's the site of a shopping district and a parking garage.

And now a piece of it is in our garden.

But not for long.

FOR SALE: One prison door. Best offer. All proceeds will go to the Athens Books for Prisoners. 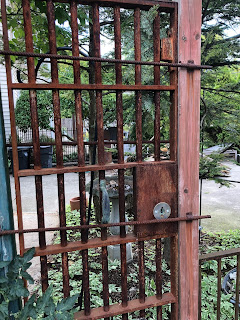