I have been up since 5 am worried about our daughter who's on her way home from London.

The first part of her flight looks good, she assures me. She's got a supply of masks and hand sanitizer. There are fewer than 25 people on the plane. All socially distant. I try not to think about re-circulating-airplane air as my husband and I put the finishing safety touches on our home for the Two-Week-Isolation to come.

We've decided to tuck our daughter away upstairs, giving her full use of the bathroom, so we drag our mattresses down to the living room. Pack up our clothes and toiletries. (not hard. I literally wear the same two shirts and alternate between sweats and pajama bottoms.) Clean and paint the gross bathroom in the basement. Borrow a small fridge and put it in our daughter's room, stocked with drinks and treats.

I haven't seen her since Christmas and I am so focused on not crying when I roll up to the airport that I forget to put my car in park and nearly crash into the car in front of me.

"Mom!" my daughter admonishes as she loads her suitcases into the trunk. I slam my feet on the brake and laugh like a crazy person.

Morning and I leave a cup of hot tea for her on the stairs.

It's 70 degrees and we take a socially distant/masked walk as a family through the neighborhood. Our daughter tells us about the Chicago airport, only one restaurant open, McDonalds. No one masked. A crowd of people, one of the women wearing flip flops. What the hell, my daughter says. I made it two thousand miles from Europe and now I'm gonna get Covid at McDonalds in Chicago?

Customs waved her through. All they wanted to know is if she'd been to China. The Chicago fire department took her temperature and gave her a pamphlet suggesting she quarantine herself for two weeks, but no real guidelines about how to do that. Take your temperature two times per day, it says. Wash your hands.

People are protesting in front of our state medical director's home, blaming her for Ohio's stay at home orders. I plant herbs in the garden/formerly-known-as-the-koi-pond. Leave meals on the stairs. We face-time with our daughter and it's like she's still in London instead of in her bedroom.

Her temp is normal whenever she takes it, but what if she's one of the asymptomatic people? What if one of those idiot Chicago-airport-McDonalds-flip-flopping-wearing people was infected?

I'm still not used to seeing her in a mask. I want to hug her.

I'm swearing off the news again. This time I really mean it! Protesters at statehouses. Trump sitting like a child in a chair that's too big for him in front of the Lincoln Memorial, talking about how he always knew more than 70,000 people would die, but he's doing a great job. 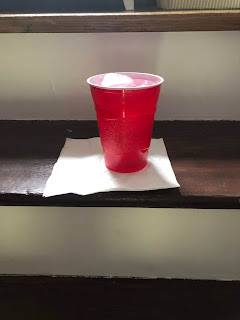 I set a drink on the stairs and send a picture to my daughter like I'm a delivery person. Your Mom-Azon Prime Order has been delivered, I text her. She rates the order 5 stars.

Later, it's so nice out, we work together in the backyard, me on one side mulching the ferns, my daughter on the opposite end wearing a mask and pulling up weeds and bamboo.

We eat dinner on opposite sides of the patio and our daughter tells us that back in early March her roommate had a fever and cough and was joking that she thought she had corona. What if she really did? Then, it stands to reason that our daughter had it too. Never mind all of the traveling she did back then. Multiple European countries and riding a packed London tube twice a day every day.

If she had it, she’d be done with it and we wouldn’t have to worry about catching it from her!

I make chocolate chip scones with friends via skype. One friend reads the recipe and we all follow the instructions. It takes two hours and we have to keep pausing to search for pans or to figure out the substitution for cream or to mute because my husband is on a conference call in the dining room. The scones are freaking good though.

I sneak a peek at the news and immediately wish I hadn't. They’ve upped the death totals. Another 100,000 people by August. Do people actually want to eat at restaurants?

Our living room has become a dorm room. 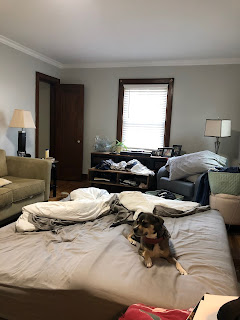 Our daughter takes her temperature twice a day and it’s always normal. But then I read things about people literally drowning in their own fluids. Little kids getting weird organ diseases. Can you smell things? I text her frantically. Do you have a sense of taste?

Don't worry, she tells me. I've been eating the peanut M & Ms you bought me. They taste great!

An article in the Guardian talks about plagues through literature and I come upon this quote:

"The primary lesson of plague literature, from Thucydides onwards, is how predictably humans respond to such crises. Over millennia, there has been a consistent pattern to behavior during epidemics: the hoarding, the panicking, the fear, the blaming, the superstition, the selfishness, the surprising heroism, the fixation with the numbers of the reported dead, the boredom during quarantine."

People on Facebook are sharing a video that says the virus is a conspiracy and don't wear masks? and something something about vaccines? and Dr. Fauci is evil?

I gently tell a friend it's disinformation and probably dangerous to share and she immediately unfriends me.

I set out more mulch and bake another batch of chocolate chip scones. The Republican representatives in the Ohio Statehouse vote to strip our medical director of her powers and the governor, also a Republican, but one of the rare ones who still believes in science and facts, says he'll veto. They're phasing in opening the state and people are excitedly talking about dining out and getting their hair done.

Nearly one full week down and one to go for our daughter's quarantine. We face-time while I make her a bowl of popcorn. Set it on the stairs.