I don't know how to say this nicely, so I'm just going to say it: the previous owner of our new-old house had an interesting obsession with wood. 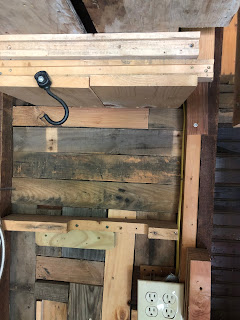 If you want to take wood installations apart, because say you want to park your cars in the garage but you can't because these wood installations extend out two feet in some places, it's not easy. Also, there's a big potbellied stove in the center of the garage, but that's another story.
But yesterday, my husband and daughter and I spent half the day unscrewing the screws that hold everything together.
While we were doing this, I was having an argument in my head with the friend of a friend on facebook And I was getting more and more pissed off. At the crazy wood installations in my garage. At the stupid comments on the facebook post and at the fact that I'd gotten sucked into commenting in the first place. I was particularly annoyed that the guy used different kinds of screws when he was screwing his wood together.
I don't know the proper screwdriver/screw lingo, but apparently, there are all of these different kinds of screws for your wood-screwing needs. The only two types I was aware of until yesterday were the straight lined one and the Phillips-head crossed-lines type, but fun fact: there are many others.
Stars, for example. And squares and circles. And to screw them in, or to UNSCREW them, in my case, you need to change out the screw heads on the screwdriver. My husband, handy-guy that he is, has a box filled with like 30 different kinds, I kid you not)
The argument that I'd gotten myself sucked into was boiled down to this:
A friend posted that she couldn't understand why people were more concerned about property damage during the protests than about people being hurt. I jumped on to say that if someone had murdered my son by kneeling on his neck for eight and a half minutes, I would want to break all the glass in the world.
Then some guy replied to my comment saying, So you're okay with destroying the world over the actions of a few cops. That makes you just as bad as they are.
And I said: I was talking about grief and anger and despair, something you apparently can't understand.
And he said: If someone killed my child, I would go after them with my bare hands. And you still didn't answer my question about if you're okay with looting.
YEAH, I KNOW, I should not get into arguments on Facebook with people who are not my friends!
Something else interesting about the guy who screwed pieces of wood together was that he used different types of screws on one piece of wood, so for example, you might find a phillips-head screw in one corner of a piece of wood and a star-shaped screw in another corner and two square-shaped ones in the center, but DIFFERENT sized-squares just for funsies.
Listen MR GUY IN THE COMMENTS are you saying that you would murder someone with your bare hands if they killed your child, but you can't understand why a mother who lost her child would want to break glass?
Oh, and HERE'S SOMETHING ELSE I want to know: How do you watch a police officer kneel on a man's neck until he dies and how do you watch a police officer push an elderly man to the sidewalk and how do you watch a police officer beat a women until she has a seizure on the street and get outraged not about the person dying under the knee or on the sidewalk or seizing in the street,
but instead get upset about stolen TVs?
And WHY THE HELL is there a toilet seat screwed onto my wall? 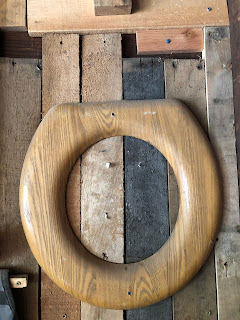