Cheese and Crackers at the End of Time

My husband and I didn’t take a vacation this year. It seems like a million years ago that I was planning to go to London in April to see our daughter. Later there was a plan to visit our son and his girlfriend in San Francisco. Maybe we’d drive along the coast and visit wineries. I wanted to see the redwood forest.

But all of that got scrapped and we've been stuck at home, my husband basically living/working in our dining room for five months, sometimes twelve-hour days, where I tiptoe around him and into the kitchen because he’s always on work calls.

We needed to get out of town for a few days. Even if only for a change of scenery.

Only an hour away from Columbus is a hiking area called Hocking Hills and we found a cabin nearby, overlooking a pond. The best part: no internet access. No cell phone service. Just four days of quiet. My husband wanted to fish. I wanted to read books. One day we took a five-mile hike that almost killed us. The next day he fished and I read a book.

Also, I’d packed cheese and crackers. The book I was reading was about the end of time and it felt like the end of time. Feels like the end of time. The man who wrote the book lives in the desert and watches the same news I do and is quietly freaked out about it. Climate change. Political corruption. Violence. (and he didn’t even get to part about the Virus yet.) This cannot end well, is the general feeling he has, that I have. So anyway, the two of us on are on the same page.

But what are we supposed to do about it, is the question.

What’s interesting about the essays in the book is how many times throughout history humans have been faced with the same catastrophe. Pretty much all of the time, apparently. Civilization collapse is the norm, not the exception. Going all the way back to the beginning. Whole entire cultures wiped out. And barely any record left of them. Worse, the “winners” rewrite the conquered people out of the picture, so if there is any record left of them, it’s a skewed version. 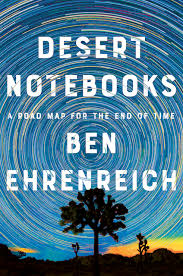 Something else interesting: people try to leave their mark anyway. Pictographs on canyon walls in the desert. Manuscripts smuggled out of war-torn cities.

This is a book about myths and languages and history and "western civilization" and religion. Also, it's about writing. Why writers bother when we may not have anyone to read what we write. If nothing else, it seems, we like to tell ourselves stories.

My husband caught one fish and when I tried to take a picture of it, it slipped off his hook. It was five inches long. He says it was more like eight. Maybe we are both right. We ate our fancy crackers and cheese on the porch overlooking the pond and the woods. He went back down to try to catch more fish. I finished my book about the end of time.

Later we spread a blanket out on the dock so we could watch the stars. At first we couldn't see any. The sky was pink. And then it was gray. And then suddenly, like it a switch, it went black. The stars came out one by one and somehow all together, until the whole sky, it seemed was filled with them. 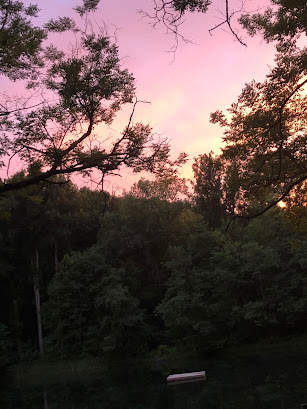