I keep thinking of 9/11, all of those firefighters climbing around the fallen twisted pile that was once the World Trade Center, the toxic dust in the air and the authorities assuring everyone that it was fine, safe. Don't worry at all about what you're breathing in, they said. Flash forward and those people are dying, have died from cancer and long-term respiratory problems.

When we get past this, assuming we do, it will be the same thing. People will wonder how we allowed fireworks and parties and parades and campaign rallies and packed bars. They’ll think we were nuts for sending kids back to school and college and football practice. It’s like a slow moving train wreck every day.

Four months into the pandemic and there's so much we don't know. How much spread is caused by asymptomatic people and how kids are affected. How to properly quarantine. And all the people catching this--the ones who seem to have gotten better... Have they, really?

Watching too much news and eating too much food. Listening to an audio book about how to talk about race and how Not to talk about race. The voice reading the audio book is soft and angry and I don't blame her. Taking long walks, and somehow, even after a year living in this neighborhood, I'm discovering new parts of it. A path that leads to the river. A long trail that spills out into meadow. Some days I feel more dread than others.

About the virus and about humans in general. Writing seems so pointless then. I have to remind myself that it’s always been like this. The people in charge, floundering. Worse, the people actively disseminating false information or spreading confusion. The willingness to put other people’s lives in danger. Someone on Twitter talked about how a lot of public schools are closing, but rich people want their private schools to stay open. As if their kids won't catch the virus.

I got an email yesterday from the human resources person at the library letting me know I’ll be going back to work the week of August 10. At that point it will have been five months since my last day working. March 13. Back then, the original plan was a two-week shutdown and opening back up April 1. But it quickly became clear that we wouldn’t be going back any time soon.

Still, I don’t know if I would’ve imagined then that it would be five months.

The library isn’t open to the public. We’ll just be shelving and pulling requests. Maybe Curbside checkout. I’m ready to go back, I guess. It’s hard to imagine. I had a fear this week that I had caught the virus. It’s because I have allergies. And the fact that I’d been around all of those ding dongs at jury duty. The three maskless women. The elevator rides. The bunched up line in the hallway. The multiple times in the public restroom. And all of us being in the same room for so many hours. I read somewhere that because of our high community spread, the odds are, if you go into a random group of 100 people, there is a 99 percent chance that one of them will have Covid.

Back to work and it's familiar and strange at the same time. Hard to wear a mask for 4-5 hours. The quiet of the library. Weird, too, being around other people. There are only three or four of us working at once, so it seems safe.

I checked in books for an hour and found a couple that looked interesting. That’s a nice part of the job. Also, being forced to write earlier and not waste too much time reading news. I went down to the youth department and shelved all of the middle grade books. We’re running out of shelf space. They have overflow tables set up in the unused-for-now-and-in-the-foreseeable-future meeting room.

There's a homeless woman living on a bench outside the Starbucks at the end of my street. She's set herself up surrounded by her things. Two rolling suitcases. An umbrella. Yesterday I drove by her multiple times and at all different hours. It was a scary day. My husband had a kidney stone but we didn't know that. All we knew was that he was in pain.

I drove him to the hospital at 10:30 at night and basically left him at the curb outside the emergency room. I drove home and worried with our daughter, watching dumb TV to keep our minds off what might be happening at the hospital. It all turned out fine. Pain meds. Instructions about kidney stones.

I picked him up at 1:30 in the morning and there was the homeless woman, still under her umbrella. Now, this morning, groggy from my late night, I'm sitting on the porch and watching the moms walking with strollers, heading toward Starbucks to get their coffees. The couples holding hands. A little boy on a bike. The church bells up the street ringing their usual hymn.

The absurd flowers I planted back in May are chest high and swaying in the breeze. The homeless woman's still on her bench under her umbrella and I can't make sense of anything. 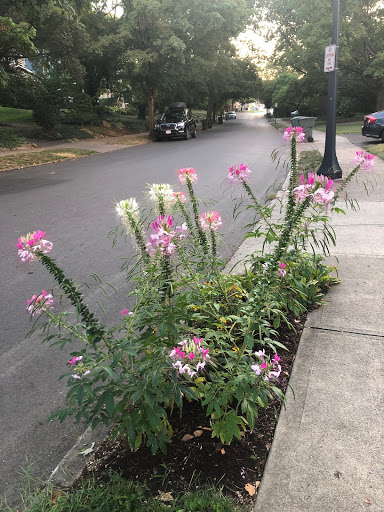