My son sent me a picture of the sky outside his apartment. Smoky white and a small orange sun. Another picture of his girlfriend sitting out on their balcony. She’s wearing a purple flowered mask, the sky behind her orange. I am thinking about the end of the world,

or what feels like the end of the world.

How we keep going, even during plague and fire. Only a few months ago we browsed in stores and sat together in darkened movie theaters and ate in crowded restaurants. Now we order what we need online and stream movies and pick up takeout.

I’ve been sending books to friends. Stories I liked that I think they might too. Sort of a Pay-It-Forward Amazon book club. The other day someone sent me a book and it made me absurdly happy. The book is about the restorative power of nature. I believe in this.

Six months ago we had an overgrown patch of ragged ornamental grass in our backyard. I spent most of the early part of lockdown yanking it out. Another week literally jumping up and down on a shovel digging up the matted root clumps. The dirt left behind was rocky and probably not right for a vegetable garden, but I planted one anyway. Lettuce. Spinach. Beets. A few weeks later, tomato plants and zucchini. My daughter, who’d fled London and quarantined in our house for two weeks, ventured outside and planted marigold seeds.

Now the marigolds are thigh high, the garden still producing so many tomatoes and zucchini that we are giving them away.

Ruth Bader Ginsberg died, and I didn’t cry. Distraught friends reached out and my daughter cried on and off all day. But I had used up my tears four years ago after Trump won the election and then surprised myself by crying again two years later during the Kavanaugh hearings, both times a stark reminder that there are some men who see women as lesser, who give no thought at all about hurting us.

An old self has resurfaced, the eight-year-old who figured out fast that the people in charge either don’t know what they are doing or don’t care or are actively trying to harm me. If I want to survive, that is on me.

And then I went with my daughter to a candlelight vigil in front of the Ohio Supreme Court for Ruth Bader Ginsberg. Mostly women there, of course, moms with their daughters, a little masked three-year-old dancing around the fountain. A woman offered my daughter candles, and we lit them and walked over to where people were signing their names and writing about Justice Ginsberg and what her work and her life had meant to them. We are Ruth-less, one of the signs said. Today we mourn, tomorrow we fight for your legacy.

My son told me the smoke is better out where he lives. The heat broke so he and his girlfriend can open the windows. This week we passed 200,000 Americans dead from Covid 19 and the Republicans are gleefully rushing to confirm a justice to fill Ginsberg’s seat, a person who will likely work to overturn everything she fought for.

one gift of a candle

one book at a time? 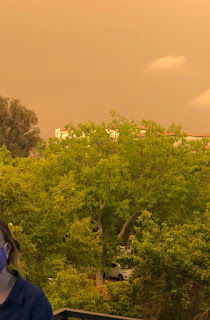