I promise I don't want to steal your chickens

The other day I was telling my husband the plot of a book I'm reading and he was nodding and making seemingly interested Hmm sounds, when it suddenly occurred to me that most of our marriage has involved me telling him the plots of the books I'm reading and him nodding.

When I told him my realization, he said:  Does that bother you?

The real question, I said, is: Does that bother YOU?

He laughed. But now that I think about it, he never answered the question.

We were having this conversation out on the deck of a cabin in Hocking Hills, the same place we'd retreated to several weeks ago and loved so much we decided to go back. We could see the restful-looking pond in the distance and we were snacking on olives and fancy cheeses and sipping wine from coffee mugs.

In addition to talking about the book I was reading, we also talked about the signs we saw on a chicken coop down the road. The signs basically said, WE WILL KILL YOU IF YOU EVEN THINK ABOUT STEALING OUR CHICKENS.**

We'd seen these signs the last time we stayed here. Next door to the cabin property is a farm. The chicken coop is close to the road. The signs, which include pictures of guns, are aimed toward the road where we took our daily walks. 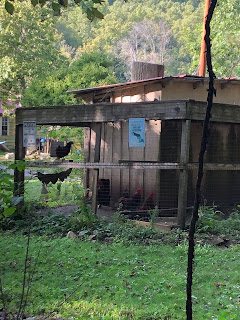 I was fascinated by the warnings on the signs. Would the chicken owners really kill people who tried to steal their chickens? Was chicken theft a big problem in this part of Ohio? I kept meaning to take a picture of the signs but I chickened out. What if the paranoid chicken owner caught me and thought I was casing her coop, so to speak?

a. People who thinks it's perfectly okay to kill someone if they try to steal your chickens

b. People who think that's... weird

Take two at the cabin, and I was determined to snap a picture of the shoot to kill warnings on the chicken coops. My husband came with me for moral and possibly physical protection. No one was around so we took a very long look at the chickens and decided that they actually might be roosters.

And then we walked back to the cabins and I told him more about the book I was reading. 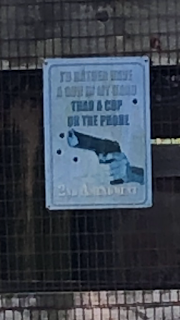 ("I'd rather have a gun in my hand than a cop on the phone. 2nd Amendment") 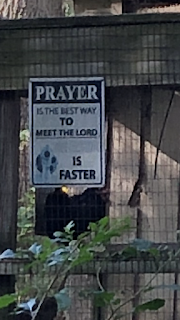 ("Prayer is the best way to meet the Lord. A gun is faster.")