Up the street in my neighborhood they were having an Irish folk band and a food truck. I told my husband we should go. It'll be fun, I said. A chance to meet more of our neighbors. Plus, don't forget the food truck.

My husband has a Thing about food trucks. The thing is called He Loves Food Trucks. A few years ago we were in a rut and made a plan to do more cultural activities around the city. We visited museums and went on walking tours of historic neighborhoods and strolled around at various festivals. But the real selling point for this plan was the city's annual Food Truck Festival. Did this count as a cultural activity?

It was 90 degrees when we were supposed to leave the house to walk up the street to hear the Irish band. Suddenly, I wasn't sure I wanted to go. I was trying to picture myself sitting with a bunch of strangers and making small talk. For all of my adult life, I've been a fairly decent small-talker, but lately (the pandemic?) my old shy introverted childhood self has reasserted itself. My social skills feel rusty. Do we like Irish folk music? I asked my husband. Do we really want to sit outside in this heat?

He just looked at me. He was already walking out the door. "Food truck," he said over his shoulder.

The band was playing as we approached. People we didn't know had set up lawn chairs all over the green. We had only brought a blanket. We didn't spread it out yet. We headed straight to the food truck. There were only a couple people in line and I felt perked up by my husband's enthusiasm. We could do this! Get some food. Listen to Irish folk music. Mill around with a bunch of strangers.

I don't know anything about food truck operation. Except what I have learned from watching the cooking competition show Master Chef. But this turns out to be quite a lot, because it quickly became apparent that this truck was not going to be giving us food any time soon.

First, there was only one guy inside. He was taking orders on a notebook page. He took our order and our money and didn't ask for our names. It'll be about 25 minutes, he told us, and then he went on to the next person in line. He wasn't cooking anything. No one on the green seemed to be eating. How are we going to know when our food is ready? I whispered to my husband. He shrugged, but I could tell he was nervous.

The Irish singer was making jokes about the Australian penal system. The music was catchy and people were clapping along. I talked to a lady I recognized and told her haltingly how much I admired her garden. I felt like I was in sixth grade again, stammering to a crush. Meanwhile, my husband was growing hangrier, threatening to order a pizza and have it delivered to our blanket. A lady in the hungry, sweltering crowd volunteered to help the lone guy in the food truck. 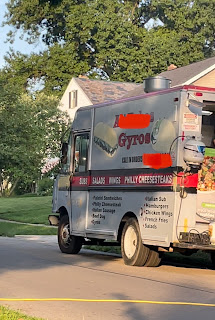 Under her management the new system seemed to be: go up and ask for your food and the guy will make it for you now. My husband and I went up to the food truck to participate in this new system. The volunteer lady, no offense, was not a good expediter, struggling to read the guy's writing on his notebook pages. The people waiting were varying degrees of annoyed and amused.

We were all clearly in the same boat, waiting for our food, hot and sweaty, but not nearly as hot and sweaty as the guy in the food truck and the saintly volunteer lady.

A woman strode up, clearly teed off. All I ordered was a salad! she said to the volunteer lady.

Turns out, her salad had been sitting there all along. The lady handed it to the woman and the woman handed it right back. Forget it, she said. I don't want it anymore.

The volunteer lady looked flustered. We can make you another one, she said. Behind her, the guy manning the food truck, was throwing a salad together, but the woman had already stomped away. The volunteer lady held the new salad out, confused about what to do next. I wanted to tell her that I could give her some good customer service tips from all of my Master Chef viewing. Instead, I took the salad.

I know where she went, I said. I'll take her the salad.

I wound through the crowd. The green was filled with people I didn't know. Older couples and young families. Kids running around or strapped to people's chests. The Irish band singer was talking about the penal system in England again. Someone had put up a baby pool with ice and was setting bottles of water into it.

I found the woman who'd ordered the salad. They made this for you, I said.

She scowled at me and grumped, But where's my fork?

Instantly, I was catapulted back to my high school and college and graduate school waitressing days. Back then, I admit my customer service was uneven. I might be nice to you, but if you caught me on a bad day, I might burst into tears or tell you to F off. This was because, back then, I did not know the secret to all customer service interactions.

The secret is IT'S NOT PERSONAL.

I started laughing. I couldn't help it. The woman's rudeness was extraordinary, but it was also absurd. I smiled at her and said, Would you like me to get a fork for you? She nodded and off I went back through the crowd.

One fork, please! I said brightly to the volunteer-not-great-expediter-and-yet-saintly lady.

I carried the fork back to the scowling woman, who while she did not apologize to me, did say Thank you. Which I took as a win. Maybe we are all a little rusty with our social skills these days.

When I relayed this story to a friend later, he told me that whenever he's in a situation like this, he wonders if he's involved in some secret psychological experiment and any moment the lights will come on and we'll see the cameras and audience and know that we're being watched and judged on our treatment of our fellow humans.

It's a fun thought.

But this was just normal every day life and not an experiment. So I went back through the clapping and chattering crowd, over to the blanket where my husband was unwrapping our food truck items.

Only one and a half hours after we'd ordered, but the food was delicious and the company was lovely.