Dispatches from Dystopia (with paper balloons)

On the Fourth of July I marched in a parade with the people I work with at the library. We waved at the crowds and smiled when someone would call out, "We love the library!" And one of us would call back, "We love you too!" It was hot outside,

but not as hot as what they were calling the Heat Dome on the West Coast, where it was 115 degrees in Portland Oregon and a lot of people don't have air conditioning and they had to set up cooling stations for the homeless people. The crowds watching the parade were thick and mask-less, everyone, for the most part, wanting to forget that we had all just gone through a global pandemic together, are still

going through it together. My husband picked me up at the end of the parade route, my favorite place in the world, The Chocolate Cafe, where they serve ice-cold chocolate cake martinis. Oh, I wanted one badly after marching in that parade! But it was only 10:30 am, so, another time, I thought. I wish

I'd gotten the chocolate martini. It gives me joy and we have to take our joy where we can get it. This is the lesson I've learned from the book I'm reading, Joyful by Ingrid Fetell Lee. Balloons, flowers, bubbles are small, simple things that make us happy and counteract the darkness of the world. The other day I was walking the dog

and a shirtless man came up behind me, yelling something. I didn't understand what he was saying. I immediately crossed the street, my heart banging, an old trigger from being attacked when I was a little girl. This happened over forty years ago but I can still call it up, the visceral fear that I am vulnerable and danger lurks where you least expect it. But back to the book Joyful. 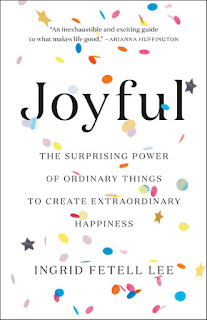 According to the author, there was a dying town in Albania, overrun by crime, ugly graffiti-ed buildings, the people hopeless and keeping to themselves, until the new mayor had several of the buildings downtown painted in bright colors. The whole place felt brightened up and he decided to paint more buildings. The townspeople got into the act, painting their own homes and planting flowers. They began venturing outside again and meeting up with each other at cafes. I want this to be true,

that something as simple as a splash of paint can be ultimately transformative. Last year, at the beginning of the lockdown, I drove to visit a friend, a planned socially-distant outing in a park near where she worked. I hadn't seen her in weeks. I hadn't left the house or driven anywhere and I was anxious and afraid of what I might find Out There.

It was eerie. Quiet. Few cars on the normally busy highways. No people except one man on the side of a formerly bustling road, standing facing the street with his pants down, urinating. What the hell IS this? I was thinking as I drove past. Is this the end of the world?

On the way home from the parade, my husband and I stopped at a grocery store and he griped about how people had left carts in many of the parking spots. What's wrong with them? he said. It's a breakdown of civilization, not having the common courtesy to put the cart back.

But look! I told him, when we were turning down our street. Someone had wrapped a knitted design around a stop sign. The Yarn Bomber had struck again! 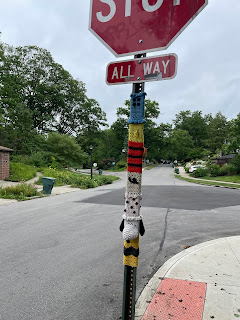 Yarn bombing is specifically mentioned in the Joyful book. Apparently several years ago a woman named Magda Sayeg wrapped a doorknob on the door of her shop in a knitted cover and found that people walking by were delighted. She started covering other pieces in the urban landscape with yarn and called it Yarn Bombing. Now there are groups of these stealth knitters all over the world, one in our very own neighborhood.

Home, and my husband and I strung up lights on the back patio, a place that only a couple of years ago when we moved into our new-old house, was an overgrown mass of rotted wood, a clotted up koi pond and a prison door. Now it's my happy place.

An herb garden. A bird bath. The lights. That walk I took with the dog, running away from the menacing shirtless man, heart pounding, hand gripped around the leash, I turned down a street where I normally don't walk. In the backyard, hanging in the trees were what looked like paper balloons. They were so lovely and surprising, I immediately calmed down. I told my husband about them and he bought them.

After the parade we hung those too. 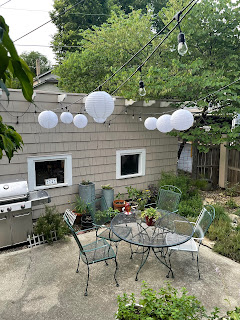