To friends and family members who are sick. To people grieving over lost loved ones. This is not soup I’ve made myself. It’s called Spoonful of Comfort. I found the place online last year when I was feeling helpless, worrying over a relative who was recovering from surgery alone. What would I do for her if I lived closer and we weren’t in the thick of a global pandemic?

The only thing I could come up with was soup.

I associate warm foods with caring. Let me bring you a bowl of soup. Let me make you a cup of tea. It goes back to my childhood, visiting my paternal grandmother, who always had soup simmering on the stove or a spaghetti sauce. And my mother's sisters, who had each other over at least once a week for tea and cake. When I was away at college and feeling homesick, I asked an aunt for one of her cake recipes. She paused and then laughed and said the cakes were all box mixes.

My grandmother's soup did not come from a box. In some ways she was the stereotypical Italian grandmother. Effusive with the hugs. Doting on me when I was in town for a visit. Offering me the soup or a plate of spaghetti. Her apartment was neat as a pin. Actually, she had an obsession with cleanliness. It may have been more than an obsession. When my son was a toddler, I took him back to my hometown to meet my relatives. I called my grandmother to tell her we’d love to stop by, but she said her apartment was too messy. Maybe another time.

There didn't turn out to be another time. She died later that year. I used to wonder if I should've tried harder to change her mind. Was she really choosing the state of her apartment over a visit with a granddaughter and great grandson, briefly in town?

But this was before I understood anxiety. Not that I fully understand it now, but I know it can lead you to some dark places, and too often, leave you with regret.

Anxiety runs deep on both sides of my family. But so does the impulse to brew tea and make soup. And I am so very thankful for that. 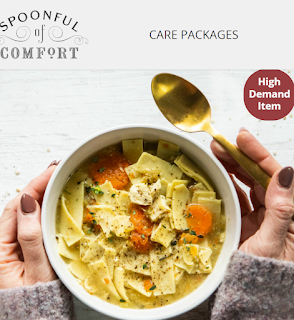