How to do nothing

I'm reading a book called How to Do Nothing. It's not really about doing nothing. It's about understanding how we're all being manipulated to click on stuff, buy stuff, tweet stuff, comment on stuff, and be perpetually outraged, terrified, entertained, and distracted by the never-ending scroll of "news" assaulting us from every direction every waking moment of the day.

I started listening to the book on audio when I was driving to DC to hang out with my daughter and her boyfriend. I was anxious about driving alone for seven hours. I have this thing about traveling alone. It's called: I Don't Want to Travel Alone. I was hoping an audiobook would be soothing and make the time go by faster.

But this was the wrong book for soothing. I want to tell you the million ways it was un-soothing and how it basically cracked open my brain and made me want to both move to a Henry David Thoreau-like cabin in the woods and at the same time, volunteer to run a booth at the farmer's market in my neighborhood,

and also fling my phone off a cliff, finish writing my book, deactivate my Facebook account and expand my pollinator garden. Instead, I'm going to tell you two stories.

Story number one is how I sat down after dinner the other night and jumped on facebook and felt the mental tug of a To-do list in the form of the number of notifications at the top of my screen, and how I started ticking through them, dutifully, the first one being a post from someone I went to high school with about how our school was about to be torn down.

Immediately, I felt a sadness mixed with nostalgia and a twinge of crappiness, because, honestly, I hated high school and don't really care all that much if the dumb building comes down. Which made me feel guilt.

A guy I sorta once knew shared a photo of a teacher I sorta remembered but never had as a teacher, and apparently, everyone who was taught by this guy loved him and someone shared how he was a social justice activist and had once been arrested for protesting nuclear war. (My feelings here were surprise, pride--I sorta knew this guy!--more nostalgia about the school coming down and Hey! This teacher even has a Wikipedia page; how cool is that?)

And then a girl I had once been friends with wrote a snarky comment, something like: Ugh, I liked that teacher. Who knew he was such a leftist?

Which made me want to comment snarkily back, the words already forming in my mind about who the hell was she and what notable things had she ever done in her life? But I left the comment box uncommented and instead jumped onto her page to unfriend her, because why do I want to be friends with her anyway, but when I pulled up her page, the most recent post was about how her father had just died, and I knew this man,

or had once, many years ago, and he was such a good person, but at the same time, I hadn't talked to him in decades and I didn't really know this girl anymore. Or any of these people. But there I was, heart pounding at my kitchen table, anxious and unsettled, and all of this anxiety and unsettledness happening over the course of only ten minutes, but churning inside of me long after I closed my laptop.

Story number two is how I spent my day yesterday, moving around in my real life. A lovely three-minute phone conversation with my daughter as she walked to her bus stop about how pretty the colors are that she's picked out for her wedding, and oh my God I'm going to be the mother of a bride! A trip to the farmer's market

where the guy who sells honey told me the meaning behind the word "beeline" and how you could watch any bee that showed up to feast on your flowers and trace where their hives are and I wanted to rush right home to try this out, but first I had to do a shift at the library

where I got into a long discussion about various pandemic books with one patron and answered questions from another about Banned Books Week and why are certain books banned and isn't that crazy and what are people afraid of, and helped a man on the computer and helped a woman fax important medical documents, and one by one, every patron who strolled into the library said something about the gorgeous weather we were having, until the end of the day

when it started to rain and a family spilled off the elevator, one of the little kids crying about how his sister had pushed the elevator button and HE had wanted to push it and it was ten minutes before we closed and the weary-looking dad had a catrillion books to check out at the self-check-out and the little kid would not stop wailing and I knew

I've been there, with the crying kid, the cranky, the tired, the bored, the scared, the sad, the angry

And even though I know that pushing a button rarely if ever solves a problem, I am here to tell you that when you are faced with a situation where it might, why not ask for the push? 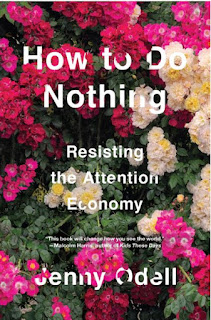 Email ThisBlogThis!Share to TwitterShare to FacebookShare to Pinterest
Labels: attention;distraction, despair, facebook commenters, How to do nothing, Jenny Odell