I am wide awake at 4 AM but I stay in bed until 5, the dog still snoozing peacefully on my husband's side of the bed. He's out of town, visiting with his parents several states away, and I am thinking about the million things I could do with this rare sliver of time alone in the house -- clean up the garden and paint the upstairs hallway and organize my office and make some luscious cream-based soup and and and--  I will probably do none of those things.

Instead, I read a disturbing book that makes me question everything I thought I knew about my childhood, and I take the dog on a marathon walk. Or rather she takes me. I've discovered the secret to her meandery route. It's not meandery at all. No. Over time, she's learned where all of the free dog treats are in the neighborhood. This is a thing people do around here, set out dog treats and fresh water for dogs. Our dog has learned and remembered these locations, and she's created a route that hits each and every one of them.

This has nothing to do with anything, but I can't stop mulling over a weird interaction that happened at work the other day, where a patron went off about masks. For the record, employees are required to wear masks at my library, but we merely recommend that patrons wear them. Most do. Some don't. It's rare that anyone says anything about it and we all just go about living our lives and talking about books. But this guy wanted to explain to us why masks were stupid and didn't work and blah blah blah,

and the two of us sitting at the desk just nodded along and blinked at him like, "okay, we hear you," but this response was not the response the guy was looking for apparently, because he raised his voice and kept ranting, informing us that he was a doctor and he felt it was his obligation to bless us with his knowledge,

Yes, he actually used the words Bless us with his knowledge, and thank God I was wearing a mask because I started chuckling under the material and had to excuse myself to go to the back room, and only later did I think of other possible responses, such as, Can we bless you with our knowledge for a second, sir? Nobody cares about your mask opinion. Plus, you're scaring us.

But of course I would never say that to him. The guy's a narcissist and narcissists don't like it when you contradict them. It destroys the narrative they have about their own precariously crafted identity and makes them feel uncomfortable to the point of being enraged and who knows how they might react and the next you thing you know, everyone is tiptoeing around the person, like they're a tasmanian devil with the emotional maturity of a three year old, someone you could hate if they weren't such profoundly broken human beings.

Anyway, that's what the disturbing book I read said about them and I believe it. There was a little girl at the self checkout with her mom while this interaction was taking place and after I came out of the backroom, to the still ranting and raving man who was blessing us all with his knowledge, I watched the mom hustle the kid out the door and how freaked out the little girl was or maybe I am just projecting,

which is another thing I was thinking about at 4 AM going into 5 AM and how dark it is outside, especially now that I-- I mean all of us-- have fallen back. So many hours stretching out into the coming day, and maybe I will make that luscious cream-based soup after all.

Right after the dog takes me on another meandery treat walk. 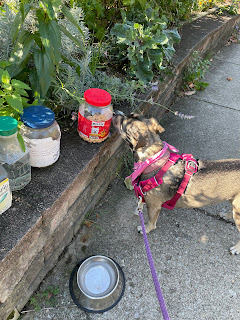 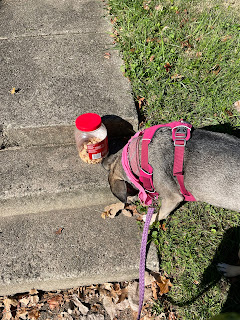 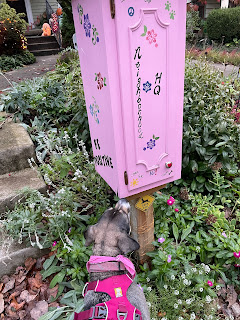 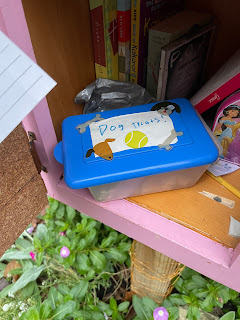