and I didn't even know it was supposed to snow today. These are big flakes, a thick downpour of them, and so odd-looking against the backdrop of trees, the branches still hanging onto their yellow and orange leaves. Just last week, it seemed, it was summer. The week before that we were moving into spring. Slip back a little further and I am driving through a snowy day like this one,

a college trip with my son through New England and how excited we both were. This was it, the final moment before he had to turn in his applications and where was he going to choose, or rather, who would choose him, and now that decision, which was mostly out of his hands, would potentially determine the course of his life.

Most of our decisions aren't so momentous. Or else, how could we stand it? We need a break between Big Things. The quiet ordinariness of the stretch of days, each one the same as the ones that came before.

The same dog walking routes. The same ingredients in the breakfast smoothie. At the library, checking in books, the same bestsellers being read and returned. The same questions when we answer the phone. Yes, we have Covid tests. No, I'm sorry, we are out of Covid tests. The polite banter at the check-out. With the new patrons. With the regulars.

Oh, I have to tell you about this darling little boy who has been coming into the library since we opened to the public again back in May. Always, he is sitting quietly in his stroller, looking around curiously and very solemnly. When I give him a sticker, his mom sticks it to his hand and he frowns the same frown as he examines it. Every time it is the same with this adorable little boy.

Until one day, he's not in the stroller. He's toddling right through the library doors. Another day, he is wearing glasses. His mom asks if we can find some books about other little children who wear glasses, or maybe we have books about animals wearing glasses? We, at the library, are on the case! Meanwhile, the little boy offers his hand and I give him his sticker. We have officially been introduced at this point. I know his name. He knows mine.

My son ended up choosing the college in New England or they chose him or however you want to describe it and he went away and has been living his life apart from us for quite a while now. Funny thing I just now realized: that college trip, that drive through the snow in fall, took place exactly ten years ago. There were other Big Things that happened along the way,

and many many more small ones. I used to get very nostalgic about these things and I would go into a misty-eyed tailspin thinking about it, how my son, for example, was once a little boy who sat in a stroller. He didn't wear glasses, but he did like stickers, and there was this one time when I thought he was taking a nap, but actually, he had crept out of his bedroom and gotten into a box of bandaids and unpeeled every single one of them and attached them over all of the available surfaces of his body,

which would launch me directly past misty-eyed nostalgia and into full-blown boo-hooing, but now I only smile at the memory. Something not funny about the snow on the college trip: it turned really bad. The trees alongside the road where we were driving, so heavily weighted down by snow covered leaves, began to crack, the branches falling and then the trees themselves, tearing down the powerlines, sending us hurtling into darkness. We barely made it home. But this snow, this day, is not like that at all.

It swirls from the gray sky, lovely and quiet, slows, and soon stops all together, leaving behind only patches of snow on the leaf strewn lawn. 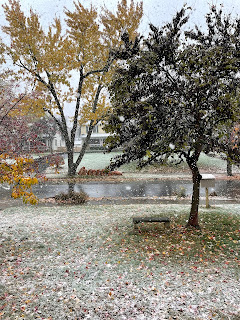