You can't take it with you

Just as I was waking up this morning, the two books I've been reading merged together in my mind and I had a lightning bolt moment of insight that made so much sense to me, I immediately wanted to write it down. The common theme is people in the second half of life, and what do you do with the knowledge that you are slowing down while the world is still speeding along? Resist

or accept? Take my hair, for example. During the pandemic I stopped getting it colored, and slowly, my naturally darker hair came back, but with strips of white and gray along the sides of my face, the overall effect some might call the "Madwoman in the Forest Look," but then my daughter said it was cool, and anyway, who cares, Mom? It's not like you're going anywhere, seeing people.

But now I am, sorta, going places, seeing people, and I've decided I don't really care, It's hair. Whatever. Still, every once in a while, I catch a glimpse of myself and think, Who is that?

Me. But suddenly, older. Old. Not that there's anything wrong with that. Even so, it's different. You spend half your life working toward something, accumulating stuff, planning for some distant future, coloring your hair, and the next thing you know...

maybe you don't want to do any of that anymore?

Or maybe you don't have the energy or you forgot why you wanted some of those things you used to want so badly or you look around at the world and think This is Crazy and Awful, and maybe it was always this way but you didn't see it before because you were... busy? And now you have all of this time to think about it, except,

you don't, really, have ALL OF THIS TIME, do you?

Anyway, the two books I've been reading are:

Vladimir by Julia May Jonas, which is about a fifty-eight year old woman, who until recently, felt that she was on the top of her game, mentoring students at a small liberal arts college where she is a professor, keeping up with the changing times, adjusting happily to her grown daughter being out of the house, but then, her husband is accused of having affairs with several of his students and suddenly all eyes are on our main character, the campus swirling with rumors, judging her as complicit in her husband's escapades or as the foolish, dowdy, cast-off wife.

Enter: Vladimir, the new hunky young(er) professor, and now our aging main character wonders if it's too late for her to have her own affairs, her own adventures, or is she past her prime?

The second book, From Strength to Strength: Finding Success, Happiness, and Deep Purpose in the Second Half of Life, by Arthur C. Brooks is about very successful people and how hard they work and continue to strive as they get older, not wanting to face their inevitable decline, and then either doubling down on the work and the striving, running in the rat race until the bitter end

OR switching gears and finding a different kind of fulfillment. There are all kinds of fun examples of people who pushed themselves right up to death and were miserable and people who took different paths and were more content, the ludicrousness of accumulating stuff when you can't take any of it with you, but how human it is to want to keep pushing and taking, and how all of that is really about our fear of dying. But what-are-ya-gonna-do?

Don't worry, the book has the answer: Stop coloring your hair. (haha just joking. You'll need to read the book yourself to find out.)

So, I don't know how these two books melded in my mind this morning as I was waking up, but they did, for just a second, hover there together, making me think I had some great new understanding about life and the inevitability of death and getting old, and also, at the same time, about fighting getting old and pretending I'm not going to die.

Unfortunately, it slipped away from me and now we're all going to have to figure it out for ourselves. 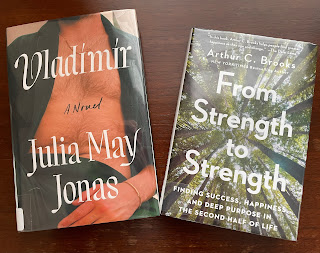 Email ThisBlogThis!Share to TwitterShare to FacebookShare to Pinterest
Labels: aging, Arthur C. Brooks, fear, From Strength to Strength, Julia May Jonas, raging against the dying of the light, Vladimir