The marjoram in the garden

turned out to be tarragon. For three years now I've had it growing, the only plant I took with me from our old house, and the first one I planted in the freshly filled up koi-pond-turned-herb-garden.

Marjoram, if you don't know it, (and I didn't) is kind of like oregano. Rub a leaf between your fingers and you'll get a pizza-y vibe. (I never rubbed a leaf between my fingers.) Also, I never knew how to pronounce the word until yesterday, right before I yanked the plant out of the ground by the roots. I had been putting the emphasis on the second syllable-- marJORam. But actually, it's pronounced MARjoram, which makes me think of margarine, and another mark against it in my opinion.

But this is entirely unfair, considering that it was not marjoram that I had growing in my garden for three years, but tarragon. (Pronounced TARragon). Tarragon, if you don't know it (and I didn't) is widely used in French cuisine. You will need it, for example, if you want to make a Béarnaise sauce. According to the New York Times Cooking Section, a good Béarnaise requires one tablespoon plus one teaspoon of tarragon leaves. If this is accurate, and why wouldn't it be, I could've made several oil-sized drums of Béarnaise sauce with the amount of tarragon leaves I had.

For the record I am not a huge Béarnaise sauce fan. So, why did I have tarragon growing in my garden? Good question! What happened was, we were moving and everything was rush rush rush and I grabbed the plant to take with me to the new house, and then there was a global pandemic, and I was deconstructing the koi pond in the backyard to keep my mind off mass sickness and death and I planted the plant I thought was marjoram.

Cut to: it took off like a weed, and the other day I was looking at it, really looking at it, and really thinking, why do I have so much marJORam (mispronouncing it in my head) and what can I use this for in my cooking, and when I looked it up in an herb cookbook, I saw a picture of marjoram and it registered for the first time that THIS plant was not marjoram. 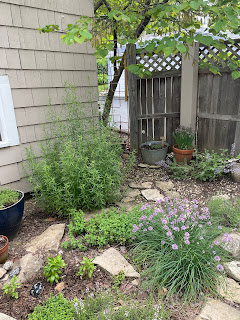 It's tarragon, and I don't want or need this much of it and over the past few days it's pretty clear that I have thought entirely too much about it. But this beats thinking about what I really don't want to think about:

how when I was teaching fourth and fifth graders twenty years ago, we had a faculty meeting about school shooters and the protocol for a lockdown was for the teacher to run to the classroom door and pull any stray children in the hallway into the room before locking the door, and if a child happened to be left out in the hallway, alone,

you have to leave them there, instruct them to hide in the restroom and squat on the toilet or something, good luck, and I couldn't stop picturing it, my children your children, finding themselves alone in the hallway on the other side of the locked classroom door. My mind wouldn't picture it any further,

the part where there was a crazed gunman roaming the school, blowing children's heads off, but today I am picturing it, despite all of my best efforts, the children in the classrooms or outside the classrooms, the abject terror on both sides of the door, and for a moment

I want you to picture it too, this horror that happens over and over again in our country. Sit with it, squirm with it, hold it for longer than four days, and let's do something about it this time.

Email ThisBlogThis!Share to TwitterShare to FacebookShare to Pinterest
Labels: gun violence., herb gardens, tarragon that is not marjoram