and I am trying to make sense of it. The white supremacist man who murdered ten people at a grocery store yesterday. The lovely writer friend who offered me seedlings from her garden. Six tomato plants. Two zucchinis. Two cucumbers and one chamomile. I really love that chamomile. I went to a rally

with my husband. The last rally for reproductive rights I attended I was with my daughter. Several hundred people gathered outside the Ohio Statehouse, a woman from Planned Parenthood waving her megaphone, telling us: "Next time, come back with your boyfriends, your husbands, your fathers, your brothers." This time the men are here. This time there are several thousand of us.

Some of the men wear rainbow vests that read Clinic Escort. It makes me want to cry when people show up for each other. My friend had all of the carefully potted and labeled seedlings waiting for me when I came to collect them. I say, my friend, but the truth is I hardly know her. A few years ago she gave me an aloe plant. She'd read a blog post I'd written about a weird encounter I had with an aloe juice salesman in Prague and offered the plant to me. I take back what I said about not knowing her. I know this: she is a giver of plants.

My husband held my sign for me at the rally when my arm got tired. He was hot and his back hurt, but I was the one who said it's okay, we can go now. My sign is the same one I take to all the rallies. A stop sign with the word NO. Here is one way I have of making sense of things: Hold up my hand to everything that is terrible and refuse to consent to it. White supremacists with guns. Deluded people who want to tell others what they can and cannot do with their own bodies.

The man who murdered the people in the grocery store was an eighteen-year-old forced birther. In his "manifesto" he raged about how white women need to give birth to 2.6 babies or be replaced as a race. The world is broken the world is beautiful and I am trying trying trying to make sense of it,

but what if there is no sense of it? What if it's only us, here, now, in all of our brokenness and beautifulness? After the rally I went to work at the library. I stashed my NO sign in the back seat of my car. I packed up all of my extra seeds and filed them in the library seed exchange.

It isn't much, but I like to imagine later this summer, my flowers growing wherever strangers have planted them. 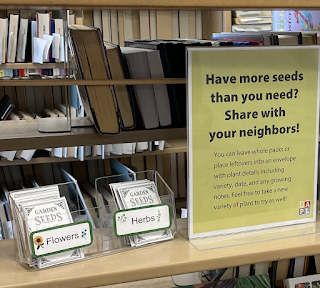